Syria and Russia: Washington wants to use al-Rukban camp as human shield 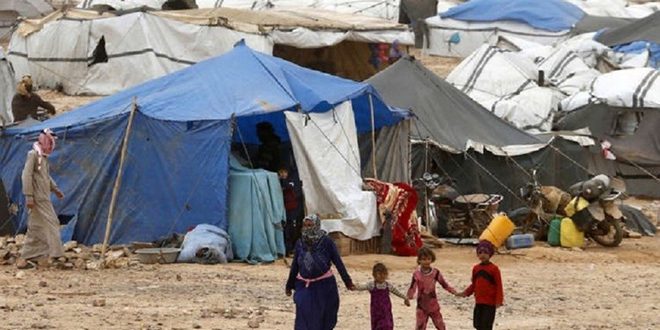 Moscow, SANA – The Syrian and Russian coordination committees for the return of displaced Syrians stressed that the United States wants to keep the displaced people in al-Rukban Camp to use them as human shields for their forces which are present illegally in al-Tanf area.

In a joint statement on Tuesday, the committees said the evacuation of civilians from al-Rukban Camp is proceeding very slowly, while the United States keeps providing terrorist groups under its control with food from humanitarian aid convoys meant for the camp.

The statement said that under the pretense of caring for Syrians, the Americans are working to keep people in the camp to use them as human shields so that they can maintain their occupation of al-Tanf area.

The committees said the American side’s refusal to dismantle the camp will only exacerbate the suffering of the Syrians being held against their will in al-Tanf area.

The statement said that humanitarian aid sent to Syria should take into account that part of it must go to the people who used to be in al-Rukban Camp and were evacuated to Homs province, who number 7434 so far.

The committees said Russia and Syria support the delivery of aid to Syrian citizens, but a large part of the first two convoys sent under the care of the UN ended up in the hands of terrorist groups, stressing that transparency can only be achieved by delivering aid directly to the camp itself.

The statement also pointed out that the humanitarian situation in al-Hol Camp in Hasaka province is deteriorating due to the actions of the Americans and the militias they support, with over 73,000 people, over 90% of them women and children, currently living in very difficult conditions there.