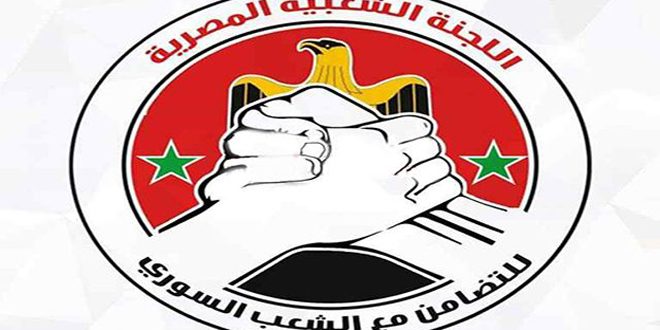 Cairo, SANA_ The Egyptian Popular Committee for Solidarity with the Syrian People has condemned holding  displaced Syrians in al-Rukban  camp by the US forces and preventing them from returning to their areas liberated from terrorism by the Syrian Arab Army.

“The US forces are practicing bullying and committing crimes against the Syrian people, which requires an international trial,” the committee said in a statement on Sunday.

” These forces are not fighting terrorism as they claim, they are backing terrorist organizations,  working on evacuating terrorist leaders and deporting them to other places,” the statement added.

The committee pointed out that the United States is the one who created terrorism in the region and supported terrorist organizations politically and militarily in an attempt to implement the Zionist plan to serve the Israeli enemy entity.

It clarified that the victories of the Syrian Arab army against terrorism led the United States to madness because Syria defeated its conspiratorial scheme in the region and overcame its tools of terrorist organizations.