Ala: Syria calls for keeping away from selectivity in dealing with human rights issue 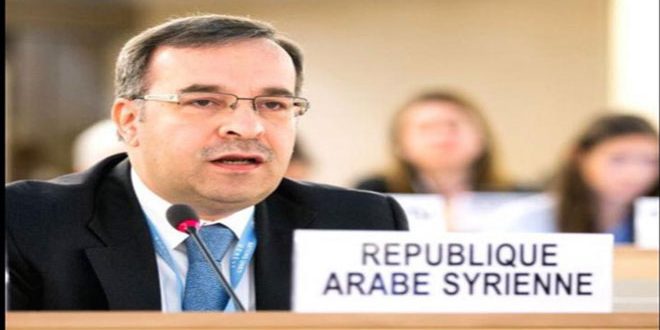 Geneva, SANA-Syria’s Ambassador to the UN in Geneva, Hussam el-Din Ala, affirmed on Wednesday that the pressures practiced by the US and its allies to cancel the 7th item of the human rights Council agenda to protect the Israeli occupation entity from inquiring about its violations in the occupied Syrian Golan and Palestine reflects unprecedented level of hypocrisy and double standard policy.

“Those pressures form a kind of clear encouragement to the  Israeli entity to continue and consolidate its occupation of Palestine and the Syrian Golan as well as a support for its illegitimate attempts to get a recognition of annexing the Syrian Golan in a violation of UN relevant resolutions, including resolution No. 497 for 1981 which considered the annexation attempt as null and void,” Ala said in a speech at the 40th session of Human rights council.

He added that exploiting the Council to target more legitimate governments, under pretexts and slogans of protecting human rights or spreading democracy, holds the Council responsible  for the human suffering caused by external interference in the domestic affairs of sovereign countries.

“Syria calls on the council to keep away from selectivity in dealing with challenges related to protecting the human rights, particularly those connected to the impacts of using terrorism and using the coercive measures against countries on the human rights,” Ambassador Ala said.