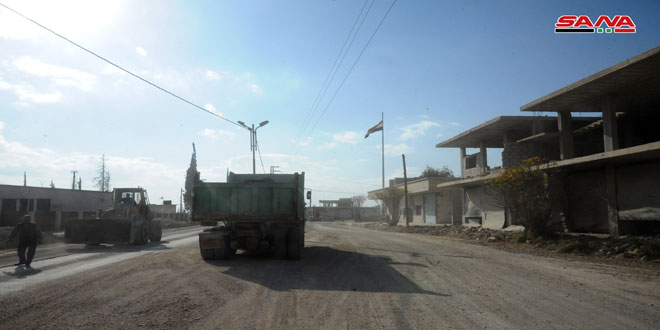 Damascus Countryside, SANA – Resident of Harran al-‘Awamid town, 25 km southeast of Damascus, are dusting off war rubble and cleaning up the severe damage caused by terrorism.

The town is considered one of the biggest and most important areas in Douma area in the Eastern Ghouta. Its inhabitants are determined to restore what has been destroyed due to the terrorist attacks, meanwhile, hundreds of its youth are carrying out the mandatory military service as they have joined the Syrian Arab army to cleanse every inch of the homeland from terrorism.

The concerned parties in the town, in cooperation with different service institutions in Damascus Countryside governorate, provided 80% of basic requirements, including electricity, water, agricultural equipment and educational services to ensure an appropriate environment for the return of hundreds of those who were forced to displace and flee the terrorists’ atrocities.

SANA reporter and cameraman toured the town and inspected restoration works, the removal of debris and earthen berths from streets and the rehabilitation of schools.

Mayor Ammar Askar noted that more than 1000 families have returned from Lebanon and Jordan to the town after being liberated of terrorism, underling the Technical Services Directorate’s efforts to rehabilitate streets, sewage networks, the health center and other governmental institutions.

He added that the production wheel begins to rotate in the area, pointing out that crops have been transported to Damascus markets and up to 40 agricultural grants have been distributed to farmers.

Regarding the situation of electricity in the town, medium- and low-voltage networks have been installed at a length of 10 km to feed the town, in addition to putting two power transmission plants into service.

Three schools have been rehabilitated and equipped with all educational materials and equipment, said Askar, adding that around 1000 students are going to school where a well-qualified teaching staff supervises the educational process.

Harran al-Awamid is just one among many other towns which witness a state of recovery and the return of normal life as thousands of people started to come back after eradication of terrorism thanks to the sacrifices of the Syrian Arab army.