Sabbagh: Russia is partner in victory achieved by Syria against terrorism 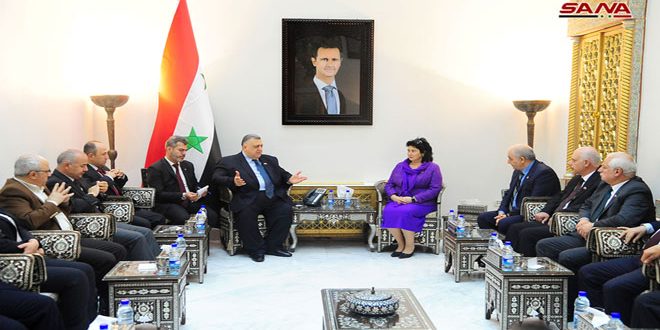 Damascus, SANA – Speaker of People’s Assembly Hammoudeh Sabbagh stressed that the allied states, particularly Russia, have played an important role in consolidating Syria’s resilience throughout the years of war.

“Just like the way we have been partners in confronting terrorism, we are partners in victory,” Sabbagh said during a meeting with member of the Russian State Duma Tatiana Batysheva, who is also the director of a center for pediatric psychiatry and neuropsychiatry in Moscow.

He pointed out to the issues that unite the two friendly peoples of Syria and Russia, expressing hope of increasing the volume of cooperation and boosting efforts of the medical organizations and centers in the two countries for treating injuries caused by the terrorist acts, particularly among children.

For her part, Batysheva pointed out to the historical relations of cooperation and friendship between the two countries, expressing readiness to help children in Syria through the Center she heads and to work on rehabilitating them psychologically and physically.

“The goal of my visit to the country is inspecting the situation of the Syrian people, children in particular, in terms of injuries, as well as to help doctors and health workers specialized in psychotherapy through Russian expertise ,” she pointed out.

The Center has already provided prosthetics to children in Syria, according to Batysheva.