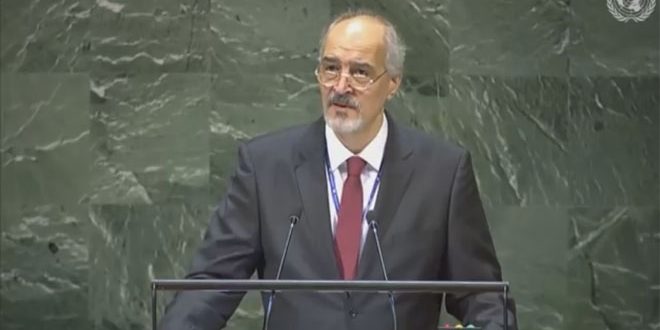 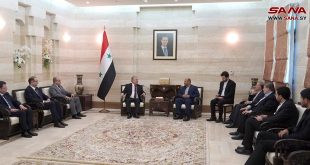 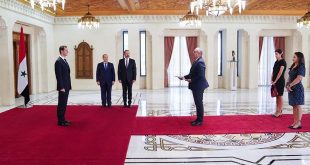 New York, SANA- Syria’s Permanent Representative to the UN Dr. Bashar al-Jaafari on Wednesday stressed that the Syrian Arab Republic will continue to support the steadfastness of the Cuban state and people in the face of the unjust embargo imposed on them by the US since 1962.

In a statement at the UN General Assembly on the provision no. /43/ titled “Necessity to End Economic, Trade and Financial Embargo Imposed by US on Cuba,” al-Jaafari noted that the economic siege imposed by some governments on many of the world’s states directly hinders the achievement of economic and social development of these states’ peoples.

He said that Syria completely and unconditionally supports the draft law mentioned in the document A /73/ L /3/ which reflects the UN rejection of the unilateral coercive economic measures.

He wondered how the representatives of some states call for speeding up the implementation of the goals and purposes of 2030 agenda for sustainable development while at the same time their states impose unilateral coercive economic measures on Cuba, Syria, Iran, Venezuela, Democratic People’s Republic of Korea “DPRK”, Palestine, Federal Russia and other states.

He affirmed that the economic siege imposed by some governments on many of the world’s states directly hinders the achievement of the economic and social development of these states’ peoples, and therefore, the credibility of  the UN is at stake, particularly after 191 member states last year granted an absolute and unconditional mandate to the UN to end the embargo imposed on the Cuban people from 56 years ago.

Al-Jaafari said that those who impose the unilateral sanctions are the states which enjoy an economic, political and military influence which makes them think that they can punish the states which oppose their policies of imposing hegemony on the world under the pretexts of defending human rights or combating terrorism.

He reaffirmed Syria’s rejection of the amendments proposed by the US delegation on the reviewed draft resolution, indicating that these amendments aim at disturbing the work of the General Assembly and undermining the unified stance in the face of the economic embargo imposed on Cuba.

He added that Syria calls upon the General Assembly to set active mechanisms for putting an end to these hostile practices and to the policies of siege and the unilateral economic measures which violate the international law, and that Syria calls for holding the states which impose illegal economic sanctions responsible for the economic losses inflicted on the states on which they impose such illegal siege.

He concluded by reminding of the briefing of Special Rapporteur on the negative impact of the unilateral coercive measures on the enjoyment of human rights Idriss Jazairy who said after visiting Syria recently “I feel deep concern that the unilateral coercive measures contribute to aggravating the suffering of the Syrian people…In light of what these measures cause of economic and humanitarian suffering, it is difficult to believe the allegations that they are found for protecting the Syrians or to push for achieving the democratic transition.”

He added that these assessment by a senior UN official is a general assessment that includes all the tragic situations which peoples are suffering from as a result of the unilateral coercive economic measures.

2018-11-01
ruaa-jazaeri
Share
Previous World Peace Council’s members: Adhered to supporting Syrian people’s struggle against terrorism
Next SANA’s reporter: A number of buses carrying new batch of displaced Syrians who are returning from Lebanon arrive in al-Dabbousyia border crossing in their way to their villages which have been liberated from terrorism by the Syrian Army. 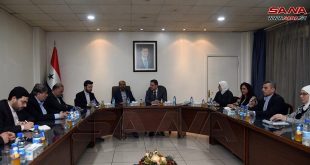