Al-Jaafari: Terrorist organizations prepare for using chemical weapons against civilians in Idleb, any aggression on Syria will support terrorism 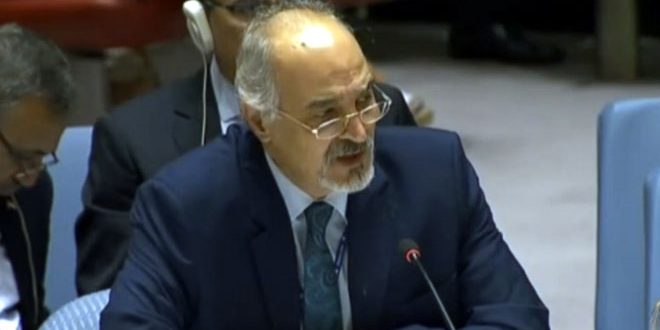 New York, SANA- Syria’s Permanent Representative to the UN Dr. Bashar al-Jaafari stressed that terrorist organizations are preparing for the use of chemical weapons against civilians in Idleb to accuse the Syrian Arab Army and to justify any aggression that might be launched by the governments of the states which back these terrorist organizations.

In a speech delivered during a session of the Security Council on the situation in Syria, al-Jaafari said “I put in your hands documented information on the preparations taken by Jabhat al-Nusra terrorist organization and the affiliated groups to use the chemical weapons against civilians in Idleb province to accuse the Syrian Arab Army and to justify any aggression that might be launched on Syria.”

He clarified that eight canisters of chlorine had been transported to Halouz village in Idleb paving the way for the scenario of the drama on the new chemical attack which represented by using poisonous chemical weapons against civilians by terrorists of the Turkistan Islamic Party and Jabhat al-Nusra, and accusing the Syrian government in order to launch an aggression on it.

He called upon the states which have a control on terrorist groups to work on preventing them from committing this crime.

Al-Jaafari indicated that some of the permanent member states at the Security Council are continuing the policy of insisting on mistakes instead of admitting their guiltiness and instead of shouldering their political and legal responsibility with regard to launching a terrorist war on Syria as they continue their aggression through using their “black banners and white helmets” to prepare for a new bloody drama using chemical weapons in northwestern Syria to obstruct the political process.

He affirmed that any aggression on Syria will be an aggression on a founding state of the UN and on the international and regional peace and security and will be a support for terrorists.

Al-Jaafari reiterated that Syria condemns the statement issued few days ago by the US, France and Britain, and it considers that using chemical weapons as unethical issue and it condemns its use in any place and under any circumstances.

He noted that Syria doesn’t possess any chemical weapons and it has implemented all its obligations with the Organization for Prohibition of Chemical Weapons (OPCW).

In a respond to the representatives of the member states, al-Jaafari said that Syria agreed on 2700 requests by the World Food Program (WFP) to deliver aid to the liberated areas and other areas and that Syrian Arab Red Crescent (SARC) in cooperation with its local and international humanitarian partners continues to deliver aid and tens of convoys to the areas in which civilians are in need for humanitarian aid.

He added that those who prepared the report of the UN General Secretariat adopted a politicized and negative approach that lacks objectivity, neutralism and professionalism.

He asserted that the Turkish military presence in some areas in Syria is an occupation that must end and that it supports the terrorism of the armed groups in these areas.

Al-Jaafari indicated that the report used politicized descriptions of some Syrian areas such as changing their description from besieged areas to difficult-to-reach areas or others, adding that the Syrian Government deals with all the Syrians based on its national role and it seeks to meet their needs without distinction.

He referred to the pressing need for dealing with the negative repercussions of the unilateral coercive measures imposed by some states on the Syrian people.

He called upon the UN General Secretariat to seriously engage with the Syrian Government for moving the humanitarian work in Syria to a new constructive stage that would contribute to launching the process of the reconstruction away from the US-Western blackmail.

He concluded by saying “we are serious regarding the track of the political process led by the Syrians only without any foreign interference and we are determined to restore security and stability and to preserve sovereignty, territorial integrity and independence of the Syrian Arab Republic and to guarantee the return of all displaced Syrians to their areas and homes.”

In a phone call with SANA, al-Jaafari said that Britain’s representative Karen Pierce, who is the current Security Council President, deliberately obstructed the delivery of Syria’s statement at the Council session.

He said that Pierce colluded in a Mafia-like manner with Under-Secretary-General for Global Communications Alison Smale, who is also British, to have the communications department cut off the television broadcast of his speech after two minutes of beginning the statement.

Al-Jaafari said that after listening to 16 statements, Pierce demanded to restrict his statement to five minutes, which he declined to acquiesce to diplomatically.

He said that Syria has filed a formal complaint to Smale and sent an official letter to Pierce demanding she circulate his full statement due to her obstruction of its delivery and to issue said statement as an official UN document so that all member states can be privy to its contents.

Al-Jaafari said that some states in the Security Council are deliberately using misdirection, lies, and hypocrisy in dealing with developments in Syria, criticizing the OCHA representative at the session for preventing erroneous information at the session.

Russia’s Permanent Representative to the UN Vasily Nebenzya said that Jabhat al-Nusra terror organization and groups affiliated to it are holding over two million people in Idleb hostage and preventing them from leaving.

He said that members of the “White Helmets” have transported two toxic gas containers in Idleb province, not to mention that there are already eight containers of toxic gas, with the intent of using them against civilians in order to justify a new aggression by Washington, London and Paris on Syria.

Nebenzya warned against new western aggression on Syria based on fabricated news and allegations about using chemical weapons against civilians in Idleb.

The Russian diplomat stressed that the Syrian army does not possess any chemical weapons, pointing out that any western attack in Syria will harm the political process in the country and will not serve the interests of terrorist groups there.

Nebenzya also asserted that the illegal presence of the US forces in al-Tanf area violates Syria’s sovereignty and the international anti-ISIS coalition led by Washington attempts to control the country’s resources.

He noted that the western states are protecting terrorists and manipulating the chemical file to exert pressure on the Syrian government, meantime, the colonial policy continues with the aim of dividing Syria instead of focusing on political settlement and counterterrorism efforts in the country.