Moscow: Equipment used by terrorists in Syria to produce chemical weapons made in Western Europe 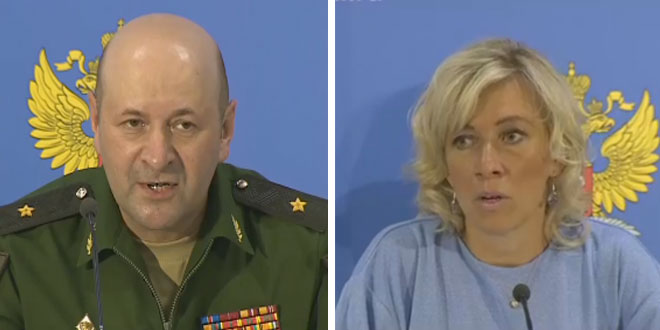 Moscow, SANA- Chemical weapons in Syria were produced by terrorists and equipment was manufactured in Western Europe, Russian ministries of Foreign and Defense have said.

In a briefing of the two ministries in Moscow on Friday, Russian Foreign Ministry Spokeswoman Maria Zakharova said that terrorists produced and used chemical weapons in Syria based on precision equipment from Western Europe.

“The equipment, the leakage of which came out a few days ago… I would like to say that some of it is equipment that was used by militants, terrorists. It was discovered in the city of Douma,” Zakhrova added.

For his part, Major-General Igor Kirillov, Chief of the Russian Armed Forces’ Radiological, Chemical and Biological Defense Troops said that the West is trying to deceive the world public opinion in the fact of the use of chemical weapons in Syria.

He added that the investigation into the alleged use of chemical weapons in areas without a visit is an indication of lack of professionalism, which is detrimental to the reputation of the Organization for the Prohibition of Chemical Weapons (OPCW), which Washington, Paris and London are trying to transform into a politicized body.

He pointed out that the only evidence they have is information from the so called “white helmets”, social media sites and monitoring centers affiliated to the “Syrian opposition”

He stressed that after the medical detection, no traces of toxic substances were found on the bodies of those who were exposed to the alleged chemical attacks.

“The United States, the United Kingdom, France and their allies are again misleading the international community and are striving for confrontation. Using staged chemical attacks they accuse Syria of violating the (Chemical Weapons) Convention, and Russia of facilitating this (violation). Against this background, a campaign has been organized to turn the OPCW into a politicized structure that has the authority to issue strict guilty verdicts against individual states and their leaders,” Kirillov said.

He pointed out that the members of the so called “white helmets” belong to terrorist organizations such as Jabhat al-Nusra. “While conducting investigations into chemical incidents in Syria, compliance with a strict sequence of actions to preserve evidence has been violated,” he said.

He stressed that the neglect of the OPCW standards “led to contradictions, inconsistencies and falsifications of facts in the reports on the results of investigations, which are clearly anti-Syrian in nature.”

“With the help of this equipment, (militants) produced high-tech and high-quality TEN explosives. During the search of the lab, (the Russian military) also found thiodiglycol and triethanolamine, which can be used for the production of sulfur and nitrogen mustard, as well as hexamine,” Kirillov said.

He added that the military had also found a chlorine gas cylinder, similar to the one used by militants in the staged chemical weapons attack in Douma.

“We would like to draw your attention to the fact that certain parts of the equipment and reagents were produced in the EU and North American countries,” said Kirillov.

He added that the “white helmets” used a low-grade explosive device in the Khan Shaikhoun last year to stage a chemical weapons attack, later blamed on the Syrian government. As the inquiry mission prepared its report on this incident without visiting the site based on the fabrications provided by this group (white helmets) .

The Russian military commander mentioned photos and videos showing people in the first hours after the attacks without any special protective clothing.