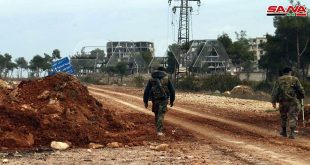 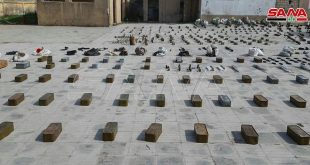 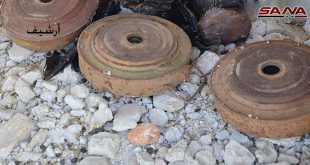 Homs, SANA- The competent authorities on Saturday found a warehouse for  improvised explosive devices, a mortar launching pad and more than a hundred mortar shells leftover by Daesh terrorists  in the village of Al-Habiya in Jabal Abu-Rajmeen area, northwest of al-Sukhna in Homs eastern countryside.

The authorities continue to comb the areas cleared by the Syrian Arab of Daesh terrorists in the depth of al-Badyia (the desert)in al-Sukhna area, about 70 km northeast of Palmyra city.

Homs countryside IEDs mortar shells warehouse 2018-06-09
ghossoun
Share
Previous Sara: What Syria, Cuba have been exposed to due to refusal to submit to US hegemony
Next Khamis calls Russian companies to take part in reconstruction phase in Syria