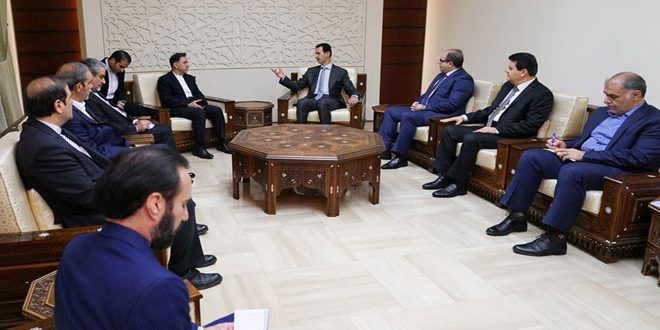 Damascus, SANA-President Bashar al-Assad received on Friday Iranian Minister of Roads and Urban Development Abbas Akhoundi, the Head of the Iranian side to meetings of the Syrian-Iranian Joint Ministerial Economic Committee, and the accompanying delegation.

Talks during the meeting dealt with the brotherly ties binding Syria and Iran, especially in terms 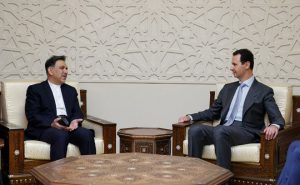 of economic relations and the will of the two countries to strengthen and expand these relations to upgrade to the level of the standing strategic cooperation at the political and military levels.

President al-Assad said that enhancing economic cooperation between Syria and Iran and all the countries that insist on defending their sovereignty and independence is one of the most important ways to resist Western projects that are based on sanctions and coercive economic measures as a means of besieging peoples and restricting them to Western hegemony policies.

Akhoundi, in turn, congratulated President al-Assad and Syrian people on the continuous achievements of Syrian Arab Army and its allies in the war on terror as 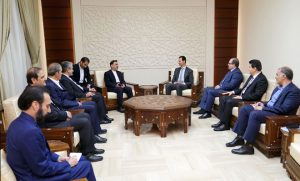 he affirmed the continuation of Iranian support to Syria in various fields and its readiness to contribute actively to the reconstruction process.

The meeting was also attended by Minister of Economy and Foreign Trade Mohammad Samer al-Khalil, who heads the Syrian side at the Syrian-Iranian Joint Ministerial Economic Committee, and Syrian Ambassador in Tehran Dr. Adnan Mahmoud.