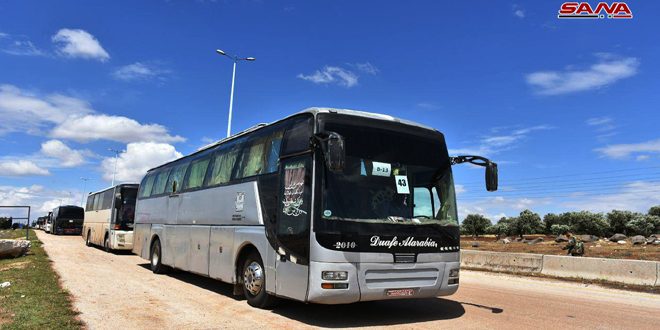 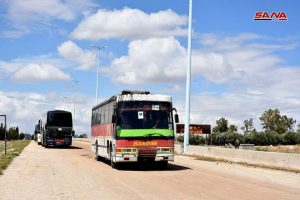 SANA’s correspondent in al-Rastan area said that 5 buses carrying terrorists and their families have been prepared and were taken to a gathering point at al-Rastan Bridge 20km north of Homs city in preparation for transporting them to Jarablos and Idleb later.

The correspondent said the buses undergo stringent inspection to ensure that terrorists don’t take any of the locals against their will with them. 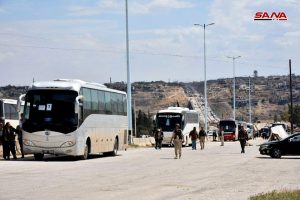 70 buses have entered al-Rastan city since Tuesday morning, and they are exiting gradually with terrorists on board and heading to the aforementioned gathering point, he added.

The correspondent also noted that terrorists fired a mortar shell at the location where the buses gathered near the bridge, but no injuries occurred.

He added that the sound of machinegun and rifle fire is heard all over al-Rastan city, and this is because terrorists are using up the ammo they have to avoid handing it over to the army. 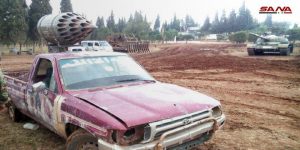 Earlier, SANA’s reporter in Homs said that terrorist groups positioned in Homs northern countryside and Hama southern countryside handed over a car equipped with a rocket launcher, a car equipped with a medium machinegun, and a makeshift cannon referred to as a “hell cannon,” along with a mortar launcher and an artillery piece, in addition to tank shells, a BMP gun, landmines, and various types of ammunition.

During the past days, the terrorists have handed over six tanks, 3 BMP vehicles, two Shilka vehicles, a huge number of mortars and various kinds of cannons and amounts of rocket and mortar shells.