Lattakia, SANA  So enthusiastic about exploring a place that has not been tracked down being not listed on references, including on internet, and unfortunately unknown for many Syrians, the Syrian Exploration and Documentation Society organized a hiking trip to Wadi al-Zahab (the Valley of Gold), a trip the hikers said was “worthwhile”.

Marching deep into the valley, the hikers walked a long way to finally reach an archeological monument dating back to the 11 century D.C..

Alkahef Castle (The Cave Castle) lies on top of a mountain overlooking the deep valley to the north of al-Shiekh Badr area in the countryside of the coastal province of Tartous.

Speaking to SANA, leader and of the Society’s activities Khaled Nweilati said that the characteristics of the Islamic architecture are evident in the Castle, “which has almost sunk into oblivion,” noting that the Islamic-style paintings on the Castle’s walls seem to date back to bygone centuries.

He pointed out that the Castle is carved into rocks and its name came from its architectural design as it includes many caves and halls that are hidden under the summit of the mountain.

The Castle consists of 7 chambers, with three towers built around its fence from the eastern, southern and northern sides. The eastern tower overlooks al-Qadmous Castle, Nweilati said.

The exploration hike began with a concert, where the 113 volunteers, who included artists, students, researchers and explorers, lit 150 candles  inside the Castle. They spent the night round a campfire performing a number of comedy plays.

Nweilati said confidently that the goals behind carrying out the 5 km long march were achieved, which are mainly “bringing attention to a very significant historical site, exploring the virgin nature of the mountainous forest around the castle and improving the volunteers skills and tactics.”

The Damascus-based Syrian Exploration and Documentation Society was established in 2008 with the aim of exploring and documenting landmarks natural, historical and archeological sites in the country and giving its members and volunteers firsthand experience with nature. 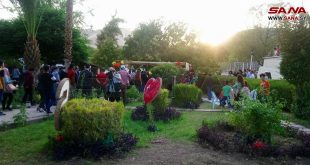