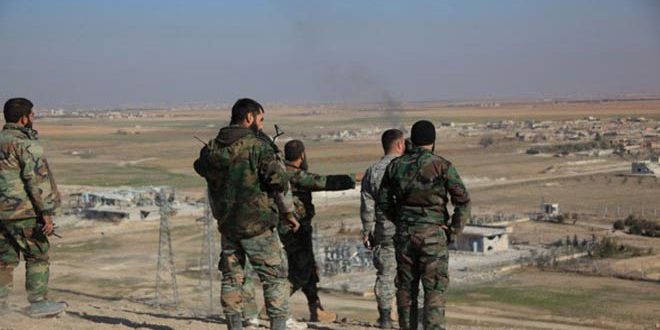 SANA’s reporter said that during the past few hours, army units and supporting forces engaged in violent clashes with al-Nusra terrorists and groups affiliated to them, which resulted in the army regaining control over the villages of Kafr Haddad, Ziyaret al-Matakh, Warida, and Zamar, in addition to Warida hill.

The reporter said that the army canvassed the villages and dismantled landmines and IEDs planted by the terrorists prior to their defeat.

Earlier, SANA’s reporter said that army units carried out intensive military operations in Tal Alloush village in the southern countryside of Aleppo using precise and appropriate tactics to protect the civilians in the village, which resulted in establishing full control over the village.

The reporter added that the army units immediately combed the village, fortified their positions in it, and began to chase the fleeing terrorists, killing and injuring many of them and destroying their equipment and ammunition.

The new advance achieved by the army units brings them closer to the Aleppo-Damascus highway by about 13 km.

The reporter, quoting field sources, clarified that the army units’ control over al-Msherfeh, al-Tweheneh, al-Husseineh, Tal al-Sultan, Masaada, Tal Kharta, Jabl al-Taweel, and Tal Kalbeh villages in Idleb southern countryside, which was achieved on Thursday, put them 9 km away from Saraqib city, which is an important point on the Damascus-Aleppo highway and is 50 km away from Aleppo.

In the past few days, Abu al-Dohhur airport and about 300 villages and towns have been liberated as a siege has been imposed on the dens of terrorists in dozens of villages in the provinces of Hama, Aleppo, and Idleb.