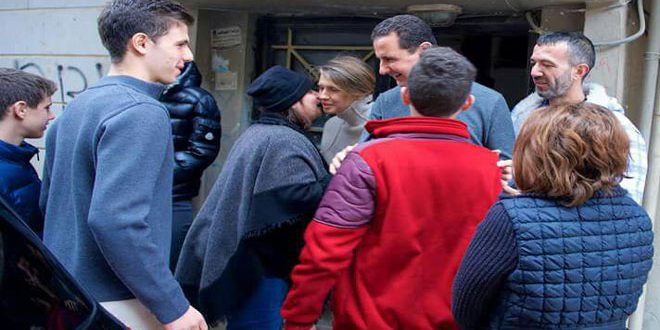 Homs, SANA-On the occasion of Christmas and the New Year, President Bashar al-Assad , accompanied by Mrs. Asma al-Assad and their children, visited on Friday a number of injured Army and Armed Forces personnel in Homs city and its countryside. 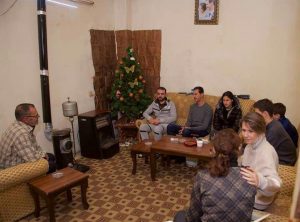 and his family visited Michael Tannous, who sustained injuries while performing his duties in defending the homeland that caused disability rated at 100% and who is receiving treatment and care by “Jarih al-Watan” program which also helped him to integrate into the society. 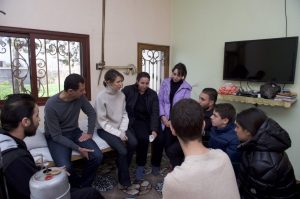 while he was defending the homeland. Through “Jarih al-Watan” program, Hwiri has started a project, a household appliances shop.

In Bahzina village in the countryside of Homs, President al-Assad and his family visited the injured Nabil Issac who suffered paraplegia after being injured while performing his national duty and remained incapacitated for two years. Jarih 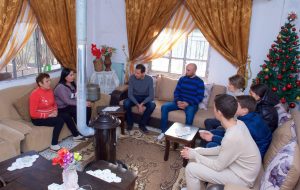 al-Watan program followed-up on Issac’s case as he continued physical therapy and managed to walk, as he received President Assad and his family at his home in the village of Bahzina.

President al-Assad and his family also visited al-Mishtaya village in Homs where they met the injured Zakhour Sleit at his shop that he opened by the help of “Jarih al-Watan” program.

Jarih al-Watan (Injured of the Homeland) program was launched by the Presidency of the Syrian Arab Republic in 2014 to support wounded people and provide their needs, particularly those who sustained injuries that prevent them from returning to their normal lives. It provides prosthetics to the injured and helps them start productive projects, in addition to providing assistance to those who suffer full disability. The project targets all wounded members of the Army and Armed Forces and supporting forces.

In the framework of Jarih al-Watan Program, the Defense Ministry carried out work to equip houses to suit the needs of 62% of injured personnel, providing 1,625 pieces of medical equipment for the injured, including 76 persons in a coma and quadriplegics, in addition to 415 paraplegics. 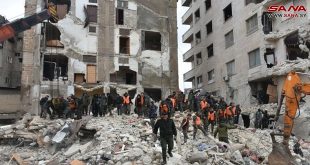