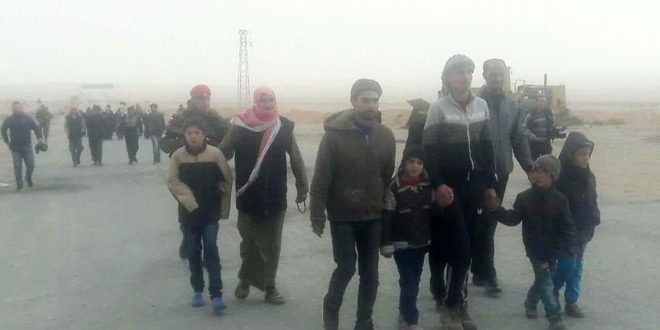 Homs, SANA-Units of the Syrian Arab Army have secured the return of dozens of displaced people from al-Rukban camp to their homes in the eastern countryside of Homs.

SANA’s reporter in Homs said that 10 families of 70 persons have returned to their homes from al-Rukban camp near the Syrian-Jordanian border after army units secured their return and transported them to their villages in the eastern countryside of Homs province.

Most of the returnees are children and women and reached their homes in al-Qaryatain safely under the protection of the Syrian Arab Army, according to the reporter.

Al-Rukban camp includes thousands of displaced people who left their homes escaping the terror of the Takfiri organizations before the army and its allies restored security and stability to their villages in the Syrian Badyia (desert).