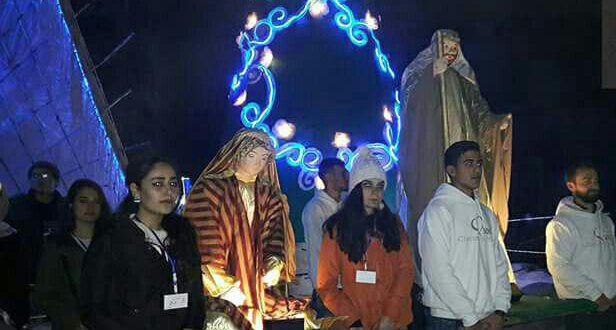 Homs, SANA- On the occasion of Christmas, celebrations, hymns and prayers for the peace and security to prevail in Syria and the world have been held in the Old City of Homs which had been cleared of terrorism.

Homs province, in general, and its ancient neighborhoods, in particular, are nowadays living a great joy in coincidence with the Christmas as in al-Hamidiya neighborhood in the Old City, Scouts toured the streets of the neighborhood and other neighborhoods reaching the Orphanage Square.

The Scouts conveyed a message of joy and hope for a better future, expressing their adherence to the homeland.

Santa Clause distributed gifts among children at the Square in Bostan al-Diwan neighborhood with the participation of children from al-Rajaa Society for Children with Disabilities.

Near the Christmas tree which was lit up at the Square and at St. Charbel Church at al-Arman neighborhood and with the participation of representatives of civil activities and voluntary teams, gifts were also distributed among children with disabilities.

The event reflected an image which proves to the whole world the loyalty of the Syrians to their homeland and their adherence to their nationality wherever they are.

Upon an initiative by the Evangelical women’s Charitable Association within a campaign under the title “Warmth from Our Hearts”, clothes and gifts were also distributed among the needy children and orphans.

Head of the Association in Homs, Michelin Qadamani, said that the campaign was launched in cooperation with Syrian Multimedia Youth Team through collecting second-hand clothes and distributing them among the needy families.

She indicated that the Association also distributed presents among children at the Syriac Orthodox Orphanage to spread joy and happiness among them on this holy occasion.

The image was the same in the other neighborhoods in Homs and its countryside with regard to the celebrations and rituals as Christmas trees have been lit up in several towns and villages in the countryside amid prayers by the Syrians for achieving the great victory by Syria in the year 2018.