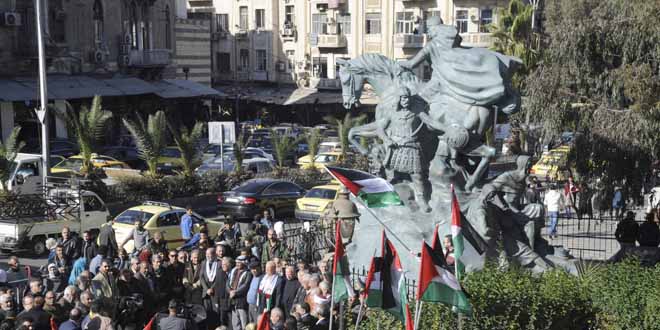 Damascus, SANA – An event was organized by the Alliance of Palestinian Resistance Forces in front of the Saladin statue in Damascus city to express solidarity with Al-Quds (Jerusalem) and in rejection of the US decision to recognize it as the capital of the Israeli occupation.

Participants, who included cultural, academic, social, religious, and student figures, said that the Israeli decision is null and void legally, because the future of Al-Quds is decided by its history and the will of its people, calling for rejecting all agreements and normalization between some Arab sides and the occupation.

They stressed that the conspiracy against Al-Quds will not come to pass, affirming that they will stand alongside the Palestinian people until they gain their rights.

al-Quds jerusalem solidarity 2017-12-18
ghossoun
Share
Previous Al-Sayyed: No decision can deny history and culture of the nation,al-Quds is Capital of Palestine
Next Update-Seven persons including children injured due to attack by armed groups in Daraa