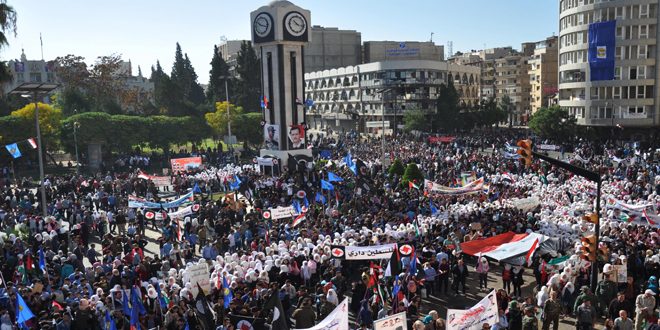 Homs, SANA – A mass rally took place in the Martyrs Square in Homs province on Thursday marking the 47th anniversary of the Corrective Movement led by late President Hafez al-Assad.

The participants in the gathering held banners commemorating the occasion, national flags and posters of President Bashar al-Assad and late President Hafez al-Assad.

Reciting national poems and artistic performances by children were held as part of the event, which was attended by a number of local officials and Baath Arab Socialist Party figures.

“We are moving towards victory rallying around the wise leadership of President al-Assad, and we are confident that Syria will not be defeated and will be built with the arms of its honorable sons,” some of the participants said in their speeches, reviewing the achievements of the Corrective Movement in all fields.

They also expressed their confidence that Syria will remain unified thanks to the martyrs’ sacrifices and the Syrians’ resilience.

A number of citizens pointed out that their participation in the event came to emphasize the steadfastness of the Syrian people along with their army until achieving full victory over terrorism and restoring security and stability to the entire Syrian territory, in addition to rebuilding a “strong and renewed Syria” according to the corrective approach.

The Corrective Movement led by founder Hafez al-Assad took place on the 16th of November 1970, featuring a revolutionary nationalist socialist line of reform and development. 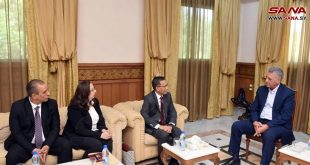