Boroujerdi: Jahangiri to visit Syria on cooperation and reconstruction 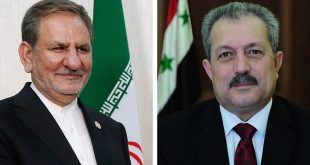 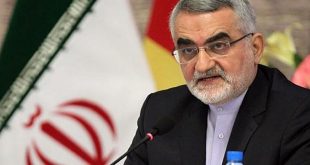 Boroujerdi: Syrian Arab Army one of the strongest armies in the region

Boroujerdi stresses Iran’s support to Syria against US schemes

Damascus, SANA – Iran’s first Vice-President Eshaq Jahangiri is due to visit Syria at a later time, Chairman of the Committee for Foreign Policy and National Security at the Iranian Shura Council Alaeddin Boroujedi said.

In a press conference on Thursday at Dama Rose hotel in Damascus, Boroujedi, who is on a visit to Syria heading an official delegation, affirmed that his country gives great importance to the issue of reconstruction in Syria , adding that the upcoming visit of the First Vice-President of Iran to Syria will be an important point to bolster the pace of bilateral cooperation and to take a number of steps in the field of reconstruction.

The Iranian official described the agreements reached at the Astana meetings on the crisis in Syria among the guarantor states as “constructive and good”, referring to the coordination between Iran, Syria, Russia and Iraq in confronting the terrorist organizations.

On the referendum held recently in the north of Iraq, Boroujedi reiterated his country’s rejection of the referendum and its opposition to any attempt to harm the sovereignty and territorial integrity of Iraq, stressing that the referendum is “doomed to failure.”

He pointed out that dialogue sessions and discussions are taking place between senior Iranian and Iraqi officials in this regard, stressing that the neighboring countries of Iraq will not allow the implementation and realization of this plan.

“What is happening in the Kurdistan region represents for Iran a transgression of a red line, and Tehran will not stand idly by,” said Boroujerdi.