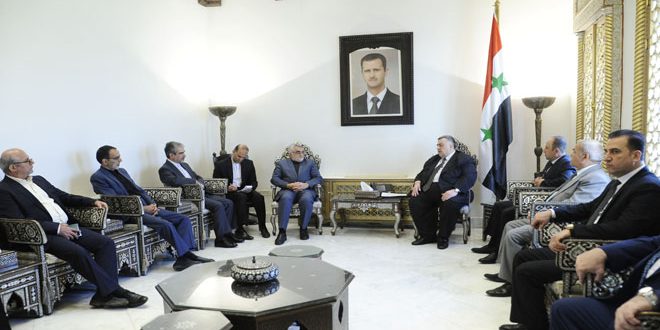 Damascus, SANA – Speaker of the People’s Assembly Hammoudeh al-Sabbagh discussed with Chairman of the Committee for Foreign Policy and National Security at the Iranian Shura Council, Alaeddin  Boroujerdi the bilateral parliamentary relations and means to enhance them.

During the meeting held on Wednesday, al-Sabbagh highlighted the depth of the Syrian-Iranian relations that have been further developed, particularly during the terrorist war on Syria.

He stressed the necessity of activating the work of the Syrian-Iranian Parliamentary Friendship Committee.

For his part, Boroujerdi affirmed that the schemes of the United States and the West to target Syria and its independent political decision have failed, pointing out that one of the objectives of these schemes is to liquidate the Palestinian cause, which is one of the most important priorities of Iran and Syria.

The Iranian official called for enhancing cooperation between the Iranian Shura Council and the People’s Assembly in Syria, reiterating his country’s readiness to support Syria in the reconstruction phase.

Al-Moallem: Syria will continue its war on terrorism until its complete elimination

Earlier on the day, Deputy Prime Minister, Foreign and Expatriates Minister Walid al-Moallem met Boroujerdi and the  delegation accompanying him.

Both sides discussed bilateral relations and the two countries’ efforts in fighting terrorism and extremism, in addition to the latest and regional developments, particularly the recent referendum in northern Iraq.

The two sides’ viewpoints were in agreement on the need to strengthen bilateral relations in all fields and to enhance political coordination, affirming their mutual support for preserving the sovereignty and unity of Iraq, warning against the aforementioned referendum’s negative repercussions in stability in the region and the war on terror.

Al-Moallem reviewed the latest developments on the ground and in politics, underlining the important military achievements of the Syrian Arab Army in cooperation with allies, which resulted in shifts on the regional and international levels.

He also affirmed that Syria will continue its war on terrorism until it is eliminated completely across the country, expressing Syria’s appreciation for all the forms of support that Iran is providing.

For his part, Boroujerdi stressed the importance of enhancing relations between the Syrian People’s Assembly and the Iranian Shura Council, affirming that Iran will continue to support Syria in its battle against terrorism and its backers until victory is achieved and peace and stability are restored.

Later, Boroujerdi affirmed his country’s support to Syria in its war against terrorism until final victory is achieved.

Boroujerdi remarks came during a visit to Aleppo province where he met Aleppo Governor Hussein Diab at the Municipal Palace in Aleppo City.

He stressed Iran’s readiness to provide necessary support to rebuild Syria, noting that Syria will get out of the current crisis stronger than before thanks to the sacrifices  of the Syrian army and
people.

For his part, Aleppo Governor briefed the delegation on the historic, archeological and economic importance of Aleppo City, particularly in textile industries, and the destruction caused to the infrastructure by the terrorist attacks..

He hailed Iran’s humanitarian contribution to help terror-affected Aleppo inhabitants and its support to reconstruction process launched in the country.

The delegation’s members toured a number of famed religious and tourist attractions including the Great Umayyad Mosque and Aleppo Citadel.