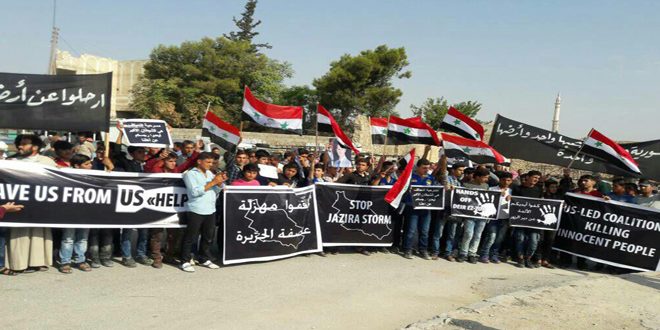 Aleppo, SANA – Locals in al-Sfeira city in the eastern countryside of Aleppo staged on Monday a protest to denounce the massacres of the US-led international coalition that caused the death and injury of hundreds of civilians in Raqqa, Aleppo, Deir Ezzor and Hasaka.

The protesters condemned the repeated attacks of the US-led coalition on civilians, including women, children and elderly people, affirming that what the Western media promotes about the alleged role of the coalition in the fight against terrorism is mere talk without any real effect on the ground.

They also saluted the heroes of the Syrian Arab Army who are achieving victories and clearing the homeland of terrorism.