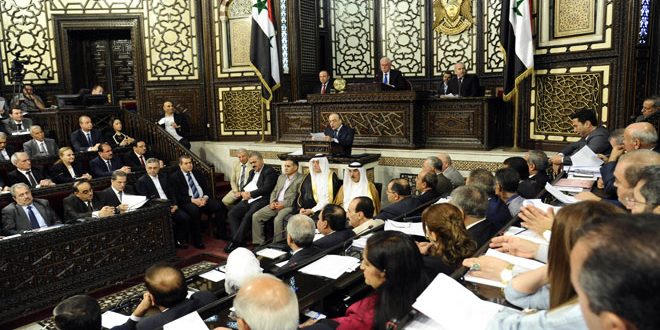 Damascus, SANA – The People’s Assembly held on Sunday its first session for the fifth ordinary round of the second legislative term, headed by its Deputy Speaker Najdat Anzour.

The session was attended by Prime Minister Imad Khamis and a number of ministers.

At the beginning of the session, Anzour affirmed the necessity of cooperation and joint work between the People’s Assembly and the government to follow up on the conditions of the citizens to reach the desired goals, which is to ensure a decent life for them.

For his part, Khamis said that the government institutions in all their names and functions were present in every area liberated by our armed forces to work on the restoration of infrastructure and repair of service facilities in order to facilitate the return of the people to their homes and activate their contribution to the national development efforts. Premier Khamis pointed out that “everyone saw the victories of our great army in Deir Ezzor,” noting that the government has been able to lead a rapid process to deliver the basic needs of the people of the city through convoys loaded with various types of goods at reasonable prices, in addition to the distribution of thousands of food and health rations.

He hailed the efforts made by the technical teams that worked hard to rehabilitate the national resources in order to put them into investment, particularly the oil and gas fields in the central region, which has contributed rapidly during the past period in improving the services situation of the energy sector.