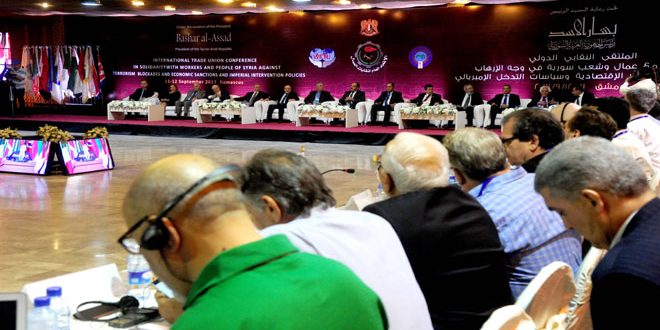 Damascus, SANA – Under the patronage of President Bashar al-Assad, the “3rd International Trade Union Conference “ITUC” in Solidarity with Workers and People of Syria against Terrorism, Blockades and Economic Sanctions and Imperial Intervention Policies” kicked off Monday at Sahara Tourist Complex in Damascus Countryside.

In a speech delivered during the opening of the Conference, Chairman of the Federation of Trade Unions Jamal al-Qadiri said that the Syrian people have faced Takfiri terrorism backed by well-known foreign powers, and they faced an economic war represented in the unjust siege.

He added that terrorism constitutes a danger not only to the Syrians, but to humanity as a whole, calling on all nations and governments to be united in the fight against terrorism by exposing the sources of its support and funding.

He pointed out that the world’s workers have stood with Syria in its war against terrorism. In turn, the Secretary-General of the International Confederation of Arab Trade Unions (ICATU), Ghassan Ghosn affirmed that in its war against terrorism, Syria defends its independence and sovereignty, adding that “we renew our solidarity with Syria and assure that, thanks to the steadfastness of the Syrian people and the victories of its army, Syria will emerge victorious.”

For his part, the Secretary General of the Organization of African Trade Union Unity (OATUU) Arezki Mezhoud said in his speech that the OATUU reiterates its full solidarity with the workers and the people of Syria in eradicating terrorism and calls upon all the workers of the world to stick together in support og Syria to come to lifting the siege imposed on its people and supporting it in the face of terrorism and drying out its sources. In the same context, the General Secretary of the World Federation of Trade Unions (WFTU) George Mavrikos said that “we came to support the resilience and struggle of the Syrian people against terrorism and the security of their country. It is a great honor for us to support a country with a great civilization throughout history.”

About 56 Arab and international organizations and more than 100 political, intellectual and media figures from 40 states are participating in the Conference.

Participants in the two-day Conference will discuss solidarity with Syria in the face of terrorism and the danger of the Takfiri mentality and the role of the organizations, syndicates and media in facing it, in addition to the economic blockade as one of the types of terrorism and its social and economic impacts on the Syrian people.