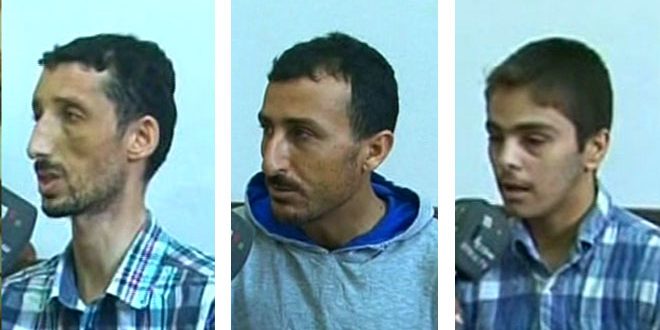 Damascus, SANA- Three terrorists belonging to ISIS terrorist organization admitted that they were heading to a busy location at a time of active movement of employees and citizens in Hama city to carry out terrorist crimes in order to inflict the greatest number of casualties.

On July 17th, the authorities arrested 3 terrorists who were wearing explosive belts near al-Arba’in roundabout in Hama while they were heading to the middle of the city and planning to target a certain location with successive bombings to kill the largest possible number of civilians.

In confessions broadcast by the Syrian TV, terrorist Mahmoud Ibrahim Hamad al-Shihani from al-Khayala village in Raqqa province said that he went to a recruitment office for ISIS and registered his name along with other people and then they attended a “Sharia” course for 20 days, during which they were indoctrinated about “Jihad” and on the final day of the course they received a sermon from a terrorist from Aleppo, and after that they were sent to the northern countryside of Hama.

“We were given military and physical training for 25 days. The guy in charge of us was a Moroccan along with another guy from Azerbaijan. They told us that they needed “inghimasis” and we registered our names and they took us to Raqqa where swore allegiance to ISIS, and from there they sent us to Idleb countryside and then to Hama to carry out terrorist acts there,” al-Shihani said.

In turn, terrorist Abdul-Rahman Mahmoud al-Hamoud from Raqqa countryside said that he joined ISIS through a “Sharia” course and that he was influenced by the speeches and publications issued by the terror organization, noting that ISIS leaders pushed young people to join ISIS and commit terrorist acts to get rid of them, adding that ISIS includes terrorists from Tunisia, Azerbaijan, Saudi Arabia, Turkey, and other countries.

He pointed out that they wanted to carry out their terrorist attack in a large gathering of civilians and military personnel in order to kill the largest possible number of people, adding that Azerbaijani and Turkish terrorists had devised the plan of the attack so that one of the three terrorists enters the targeted site with the explosives belts and kills the guards, and then the two other terrorists would enter to complete the execution of their crime.

For his part, terrorist Ammar Abdul-Ghani Hammo al-Saleh from Aleppo countryside said that the terrorists who taught and trained them were instilling in them the extremist Takfiri thought based on the rejecting others and labeling them as “Kafir” (apostate).