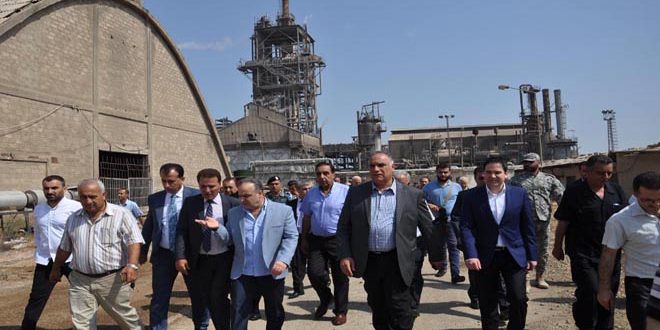 Primer Khamis affirmed that the fertilizer plants back online is a great achievement that would not have been possible without the victories of the Syrian Arab Army who liberated the gas fields from terrorism, which led to an increase in the quantities of the produced gas that is required for the plant to run.

For his part, Industry Minister Ahmad al-Hamo pointed out resuming production the plant, which has a production capacity of 900 tons per day, was achieved in record time thanks to the efforts of workers, noting that the production of ammonia-urea will meet the needs for agriculture sector.

For his part, Director General of General fertilizers Company Tarraf Mari said that the plant started working on July 7th and began producing ammonia fertilizer effectively on July 15th after a halt of more than two and a half years.

Premier Khamis and the accompanying delegation also laid the foundation stone for the lower crossing of Khirbet Ghazi. The project will cost of SYP 800 million and is 35 meters long and 12 meters wide, and will help ensure safe traffic movement between the Homs and Tartous.

The Prime Minister and the delegation toured the land of the family farming projects in Brabu area and listened to the demands of the farmers as the number of beneficiaries of the project reached 75.

During the tour, Khamis stressed the importance of these projects in supporting rural families, especially women.

Afterwards, Khamis and the delegation visited the Talkalakh silos and mill which was built in cooperation with Russia, in addition to meeting locals from Talkalakh at the local culture center as well as members of the city council and heads of administrative units.

They also visited the “Made in Syria” exhibition in Anaz village, and met families of martyrs in Mar Elias Church in the town of al-Hawash, and in the same town Khamis laid the foundation stone for the handicrafts zone.

Later, the delegation met locals from Marmarita at the local culture center, and toured a number of tourist facilities in the area.