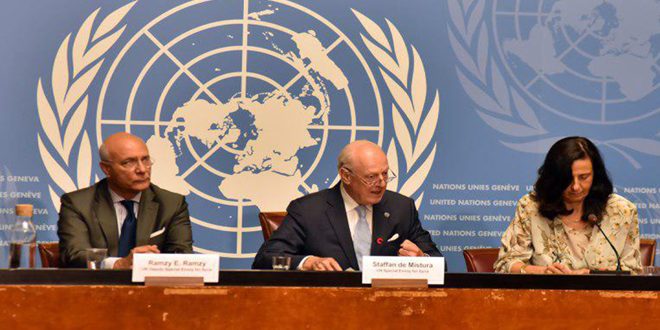 Geneva, SANA- UN Special Envoy for Syria Staffan de Mistura called for intensifying efforts to combat terrorism and implement the relevant resolutions of the UN Security Council which are related to funding and arming terrorists and limiting their movements.

In a press conference on Friday evening, de Mistura considered that the significant change in the tone at the Security Council with regard to finding a solution to the crisis in Syria is due to the previous efforts at the meetings of Astana, Amman and Hamburg and the determination of all the active parties and their keenness on setting mechanisms that would push the preparatory work forwards to achieve the task, hoping that this would be fruitful.

“We have just concluded the seventh session of the intra-Syrian dialogue in Geneva and we have achieved an incremental progress and we established a technical consultative mechanism to get deeper into issues …We need to go technically into details on many subjects,” de Mistura said.

He indicated that the technical consultative mechanism has proven to be quite effective in preparing the ground for the negotiations.

De Mistura indicated that the Syrian Arab Republic delegation proposed its viewpoint on some important issues with regard to the constitutional aspects, and it expressed readiness to discuss the four baskets in the next round and to set ideas for that purpose.

He pointed out that the file of combating terrorism was discussed at the highest levels, and fighting terrorism will be only against those who have been classified as “terrorists” by the Security Council.

Answering a question by SANA’s delegate on exerting pressure on the countries which are involved in supporting terrorism in Syria to stop funding it, de Mistura said “We are in touch with every single country related to Syria at the moment and we are constantly in touch with them and they are aware of those important resolutions of the Security Council on financing, arming and supporting terrorism.”

He added “Today, we remind the Security Council of the necessity of implementing the adopted resolutions in this regard.”

De Mistura expected that the efforts will be intensified for combating terrorism in Syria under the umbrella of the UN, underlining the necessity of protecting the civilians and respecting the international laws.

He added that best guarantee for combating terrorism in Syria is to reach a comprehensive political solution led by all the spectrums of the Syrian people in the framework of the international resolutions.

The international mediator said he intends to call for an intra-Syrian dialogue in Geneva next September to discuss the four baskets, expressing hope that “The international efforts will help push all the parties to sit together at the same hall.”

Answering a question on his priorities, de Mistura answered “The priorities before the next meeting will be supporting the dialogue between the opposition platforms to reach a united delegation and to cooperate with all the parties to consolidate the de-escalation zones in Syria to enhance the credibility among the Syrians,” indicating that the tracks in Astana and Geneva support and complement each other.

“Everyone focuses now on combating terrorism and they expect that the UN will set a framework for this which comes in my opinion under the seven points which I have explained,” de Mistura said.

Answering a question by the Syrian TV on continuing the unilateral unjust economic sanctions on the Syrian people, de Mistura said “The issue of the sanctions was not tackled at the Security Council today, and when it will be proposed, we will have our opinion.”

He added that the initiative proposed by France comes in the framework of the meetings between the Russians and the Americans and that there is no problem in obtaining aid that paves the way for the intra-Syrian dialogue.