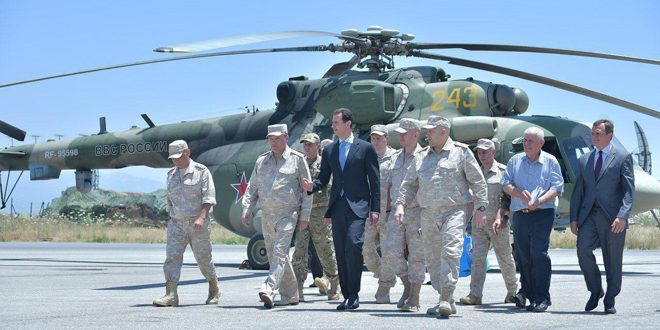 During the tour, President al-Assad inspected a number of Russian aircrafts and military transports accompanied by Russian commanders deployed at the base and Russian Chief of the General Staff Gen. Valery Gerasimov.

President al-Assad examined the modern military equipment in the airbase, including one of the latest fighter jets in the world, the Russian Su-35, and the armored combat vehicles, meeting the staff in charge of them.

His Excellency also inspected the equipment, weapons, and documents found by Russian military personnel in areas where terrorists were present and that were brought to the base. After the tour, President al-Assad wrote an entry in the visitors’ record in the base, in which he said “With the utmost happiness and pride, today I visit Hmeimim military base and meet the heroic fighters and pilots who came from the friendly Russian Federation to Syria to contribute alongside their Syrian brethren, the heroes of the Syrian Arab Army, in defending righteousness, justice, rights of peoples that are sanctioned by international law, and human morals, and to join the Syrian people in defending their homeland, unity, sovereignty, resistance, struggle, and fight against the terrorists who came from all over the world.

“Russia provided weapons and ammunition to support Syria in its war against terrorism, but more importantly it provided blood as well, which is the dearest thing a human can offer to his fellow human. The Syrian people will not forget that their Russian brethren stood alongside them in this patriotic war. Salute to all the Russian fighters and to the leadership of Hmeimim base and the Russian military leadership, and the biggest salute to President Vladimir Putin.”