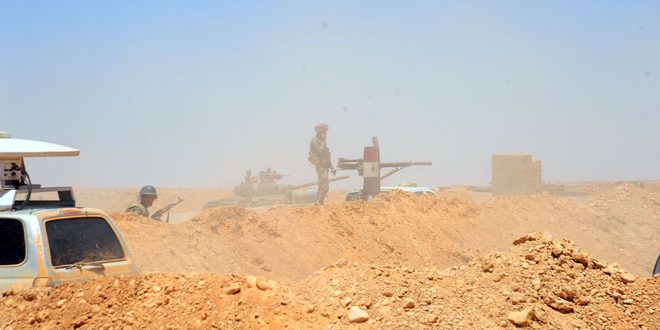 Syrian-Iraqi border, SANA – In a key achievement in Syria’s war on terrorism, the units of the Syrian Arab Army and its allies reached the Iraqi border, northeast of al-Tanf crossing, successfully realizing the goal of disrupting terrorist operations in Syria’s sprawling Badia (desert), in an important step on the way of breaking the terrorist siege on thousands of civilians in Deir Ezzor.

“The main objective of the accelerated military operations in the eastern parts of the country is to eliminate terrorists in the Syrian Badia and then heading towards Deir Ezzor to break the siege imposed on the locals in the city,” a field commanders in the Syrian Arab Army told SANA correspondent to Syrian-Iraqi border.

The significance of this achievement becomes quite evident with a precise strategic reading of the geographical area which the Syrian army and its allies have established control over and the advance to the Syrian-Iraqi border, as the army units have managed through this success to prevent groups affiliated to the US-led coalition from advancing towards Tadmur (Palmyra)-Deir Ezzor road, and thus aborting any possible attempt to disrupt the army’s ongoing operations towards Deir Ezzor, in addition to cutting off all supply routes of ISIS in the center of the Badia with the terrorist groups that have announced allegiance to the terror organization in the southern countryside of Daraa, especially the so-called “Khalid bin al-Walid Army”.

The commander pointed out that the Syrian army was able to carry out its tasks and clear around 22,000 square kilometers during four weeks by starting from the main axis of al-Sein/al-Tanf and the second axis of al-Naseriyeh/al-Mahassa/al-Buseiri/al-Alianiyeh/al-Halba until arriving at the Syrian-Iraqi border.

He added that the army advanced on to 200 kilometers to prevent the so-called international coalition’s attempt to cut off Syria-Iraq road in al-Tanf area, noting that the importance of this achievement lies in opening the supply routes with Iraq.

The liberation of the phosphate mines of Khneifis and Sawwanah in the course of the military operations in the Syrian Badia was a milestone in the army’s advance, showing the economic importance of this great achievement as these two facilities were added to the dozens of oil and gas wells in the Syrian Badia which have been back into production immediately after their liberation.

The military and economic importance of the victories of the Syrian Arab Army in the Syrian Badia are to be added to the strategic and political importance, as this success has proved to the whole world that the army and its allies are the only force capable of crushing terrorism despite of its direct and indirect supporters.

He made it clear that the repeated attacks of the US-led coalition on the military units advancing towards the Iraqi border have failed, indicating that the determinants of the military action of the Syrian army and its allies are drawn up exclusively by the General Command of the Syrian Arab Army and that the “ridiculous” threats and warnings of the US-led coalition will not succeed in preventing the army units from rooting out ISIS terrorists from all Syrian areas.