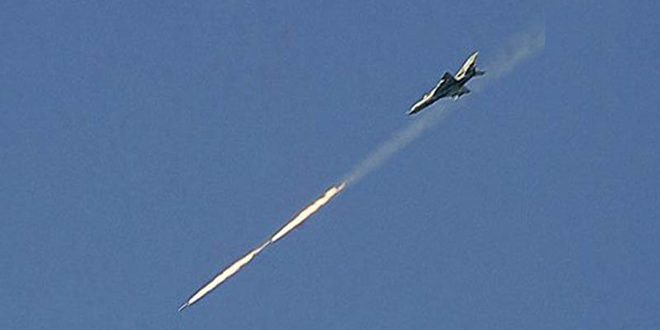 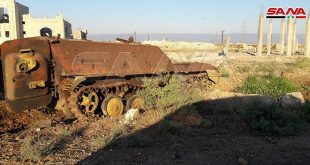 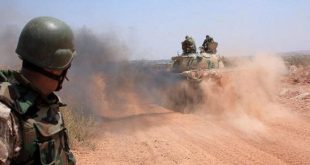 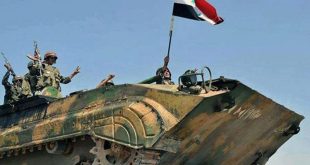 Provinces, SANA – Air Force of the Army on Thursday destroyed positions and armored vehicles of ISIS terrorists in the villages of Deir Mleihan, Debsi Afnan and al-Qadisiya in the western countryside of Raqqa eastern province.

A military source told SANA that dozens of the terrorists were either killed or injured and their vehicles were destroyed in the Army’s strikes.

The source added that several vehicles of ISIS terrorists were also destroyed in the sorties of the army on ISIS positions to the east of Wahiba Kabira village in the eastern countryside of Aleppo near the administrative borders with Raqqa.

Meanwhile, army units, in cooperation with the backup forces, established control over the whole area stretching from the thermal station to Tall Dakweh in the eastern countryside of Damascus, a military source told SANA.

It affirmed the killing of a large number of terrorists.

Units of army, in cooperation with the backup forces, restored security and stability to 37 towns and farms in Aleppo south-eastern countryside, killing more than 500 ISIS terrorists.

The source added that the army’s military operations ended up with the killing of more than 500 of the terrorists and injuring hundreds others, destroying 6 tanks, two armed vehicles and the downing of 3 drones.

Meanwhile, units of army, in cooperation with the backup forces, hunted remnants of ISIS terrorists in al-Badyah to the south-east side of Palmyra and established control over al-Abassyiah region and the historic area of Hammamt Zanobia.

The Air Force carried out intensive raids after a precise monitoring of the movement of ISIS vehicles from Uqerbat town which is the main center of the terrorist organization in the eastern countryside of Salmiya towards east of Ethria , north of Abu Jbeilat, and the villages of Harmala and Tabaret al-Mrai’eyeh, killing and injuring large numbers of terrorists and destroying a number of armored vehicles, vehicles equipped with machineguns and loaded with munitions.

SANA reporter said that an army unit, in cooperation with the supporting forces, shot down ISIS reconnaissance aircraft near the oil line south east of Aqareb town in the eastern countryside of Salmiya.

The reporter added that another army unit, backed by the supporting forces, carried out special operation against the terrorists’ gatherings in al-Maslabi point, north of Hurr Binafseh town, killing two terrorists and injuring others.Terrorist Qasem al-Sharkas was identified among the dead terrorists.

Army units foiled attacks launched by ISIS terrorists on a number of military posts on the southern axis of Deir Ezzor City, inflicting heavy losses upon them in the arms and personnel.

Army units confronted an attack launched by ISIS terrorists at the hills of Um Abboud and al-Syriatel on the southern axis of the city where violent clashes took place that left most of the terrorists dead or injured.

An army unit bombarded with a directed rocket a vehicle rigged with explosives belonging to ISIS terrorists before reaching one of the military posts to the south of the city, destroying the vehicle and killing the suicide bomber who was onboard it along with a number of terrorists who were planning to attack the military post.

Meanwhile, a military source affirmed that a number of ISIS vehicles and gatherings were destroyed in airstrikes carried out by the army air force against their positions in Talet Brouk and Talet al-Rasad in the western part of Deir Ezzor City.