Internal Security Forces Day celebrated with activities across the country 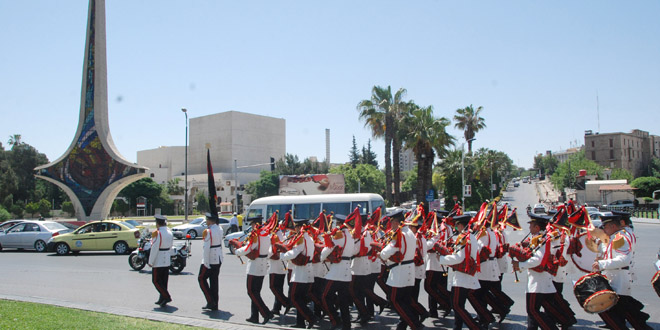 Damascus, SANA – Under the patronage of President Bashar al-Assad, the Interior Ministry marked the 72nd anniversary of the Internal Security Forces Day which commemorates the parliament’s guards and security members who were martyred by the French occupation in May 29th of 1945. In a speech delivered during a ceremony organized on this occasion at the Interior Ministry building, Interior Minister Lt. Gen Mohammad al-Shaar talked about how the guards of the parliament building refused to obey the orders of the French colonialists to salute the French flag, after which where the French colonial forces bombed the parliament in accordance with a premeditated plan and stormed it after setting fire to it, destroying parts of its staff and killed the surviving guards.

The minister added that Syria who has experienced colonialism throughout its history will never compromise on its unity, sovereignty, territorial integrity, and units of its people, affirming that terrorism will be defeated. The ceremony included honoring a number of families of the martyrs of May 29th and martyrs who fell in the line of duty, in addition to a number of wounded members of the internal security forces.

In the same context, the Interior Ministry organized a motorcade and a march by the cavalry battalion on the occasion of the Internal Security Forces Day.

The motorcade set off from Bab Masala, passing through al-Baath tunnel and by the Ministry of the Interior to the Umayyad Square and up to the Mazzeh highway, and then returned via the same route in reverse, while the cavalry gathered at the Old Fairgrounds and then they headed towards the Umayyad Square, passing by Victoria Bridge, al-Marjah Square, and then heading to the Governorate roundabout, from which and they returned to the gathering point.

Several activities were organized across Syrian provinces on this occasion attended by governors, police chiefs, and other officials, including a visit by Deir Ezzor Governor and the province’s Police Commander to internal security forces deployed in the fight against ISIS, while the Homs Police Command honored families of martyrs and injured personnel.