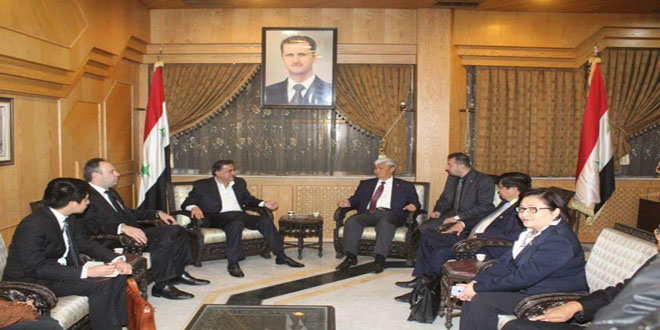 During the meeting, Diab briefed the delegation on the scale of destruction caused to Aleppo due to terrorist attacks before the Syrian Arab Army restored security and stability to it, hailing the position of the Philippine government, which kept its embassy in Damascus opened during the last period, which reflects its understanding of the unjust terrorist war waged against Syria.

For his part, Yabes expressed his deep sorrow for the significant damage caused to Aleppo city due to terrorism, expressing his absolute confidence in the ability of the Syrians in general, and especially the people of Aleppo, to rebuild what was destroyed as a result of terrorism.

He added that the Philippines has suffered and is still suffering from terrorism and it is looking forward to more international cooperation to eradicate it wherever it is, asserting the will to strengthen economic and cultural relations between the two friendly countries.

Yabes also hailed the facilitations and the support provided by Aleppo Governorate for the Philippines Consulate in the province.