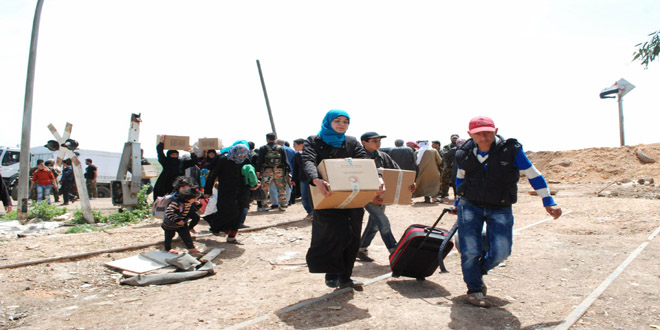 Hama, SANA – 300 families who left their homes fleeing the terrorist organizations have returned back to Helfaya city in the northwestern countryside of Hama province.

Governor of Hama Mohammad al-Hazzouri told SANA that the families included 1500 persons, noting that their return back to Helfaya has come in the framework of implementing the reconciliation agreement reached recently to restore security and stability to the city, which is located 25 km northwest of Hama city.

Al-Hazzouri affirmed that all necessary food and relief supplies have been provided to the returning families, noting that more groups of people will return to the city in the coming period.

In a relevant context, Hama Governorate has provided temporary residential places to 6 families from Jaabar village in the countryside of Raqqa who arrived in Hama on Monday fleeing ISIS terrorists.

The Executive Director of the Charitable Society for Social Welfare Mohammed Sharif al-Rashwany told SANA that the 45 persons, who include children and women, have been accommodated in apartments and provided with relief and food supplies, adding that the arriving persons have also received the necessary medical and health examinations.

On Monday, the families arrived in Hama after few days of walking on foot fleeing the criminal acts of ISIS in Jaabar village in the countryside of Raqqa.