Palmyra, SANA – The General Electricity Company of Homs rehabilitated on Monday the Power Generation Station in al-Ama water wells area in south of Palmyra city which was damaged by terrorism. 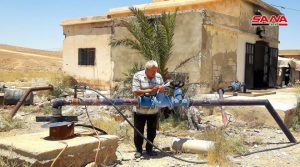 Director of Homs Electricity Company, Moslah al-Hasan told SANA reporter that the Station will contribute to operating the well of water area which feeds the citizens’ houses in Palmyra city and it was put into service after repairing the high voltage lines linking between main Palmyra ’s Electricity Plant to wells area for 3 km, setting-up a transformer with a capacity of 200 KV.

Al –Hasan added that the station seeks to secure the electrical feeding and stability of pumping water to city residents around the clock in the framework of encouraging citizens, who left their houses because of terrorism, to return home.

He noted that the company works to install 5 other transformers in the city neighborhoods with the increasing number of people who return to their houses.

2020-06-29
hybah
Share
Previous Speaker Sabbagh, Mauritanian Ambassador discuss bolstering parliamentary relations
Next A protest in Qamishli countryside against US, Turkish occupation forces and in rejection of so called “Caesar Act”