Syrian expatriates in Pennsylvania: The so-called “Caesar act”is an economic War, a form of political racism Washington, SANA- the Syrian community in the American state of Pennsylvania organized national stand in participation with a number of the American citizens in front of the Federal Building in Allentown city.
The participants condemned the so-called  “Caesar’s act ” ,clarifying  that it is an economic war and a form of political racism .

They raised the Syrian national flags, demanding the end of the economic war on Syria, expressing their support and solidarity with their motherland in the face of the most ugliest war operated by the US.
The Syrian community rejected the unilateral coercive measures imposed by a number of Western countries on the Syrian people.

A number of the American citizens, who showed solidarity with the Syrian people, also rejected their country’s policy towards Syria, this policy which contributes to increasing the suffering of Syrian people. 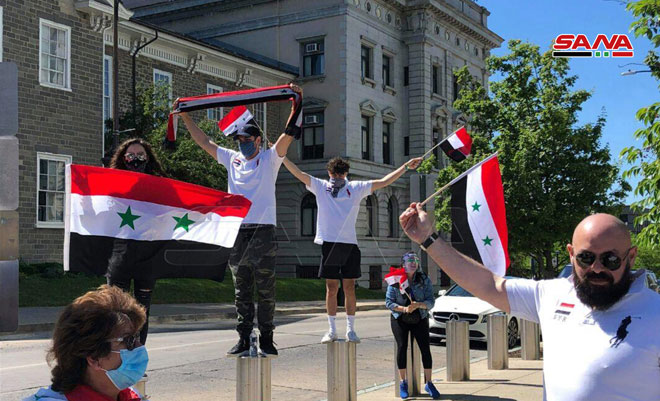 2020-06-15
m.eyon
Share
Previous Vershinin, Haddad discuss aspects of political settlement to the crisis in Syria
Next Damascus Chamber of Industry calls on industrialists to reduce the prices of their products