A Craftsman uses a wooden loom dates back to more than 100 years, unique in making silky Hatta Homs, SANA –, Sami Nadaf sits alone behind his old loom and works with it which dates back to more than 100 years in a heritage painting, which takes us to period when the Syrian textile industry was flourished and its fame reached the world fashion role.

Nadaf is 65 years old, inherited from his grandfathers the craft of textile industry, he        was unique in making silky al-Hattah which is one of the popular clothes related to the head, spreading in that period and now it becomes one of the popular heritage.

Nadaf told SANA that every rural Syrian has his/her own style in dressing, and in past times, Homs city was famous of looms and textile industry where most families in the city and countryside had looms for knitting textiles in all its kinds, but today, there is only memories of sounds which filled the echo of the old neighborhoods.

From his shop in al Al-Hamidiyah neighborhood, craftsman Nadaf moved to al-Arman neighborhood due to terrorist war in order to continue his career with pleasure in knitting silky al-Hatta in all its kinds and different inscriptions.

He said that he works in all his effort in order to inherit this craft to the next generation as an ancient Syrian career where it has developed through time by inscriptions and trappings but today it becomes in the forgotten phase and its necessary to maintain it for keeping on touch with our heritage that included a lot of creative and manual mastery.

Nadaf knits another kinds of Hatta such as al-Mosaura and al-Pohra that are dressed in Sweida province and other cities, it is red and has two chabsoulas , dressed in  al-Sudeya in Sadad , al-Mahrdawedya in Mharda city , al-Kiba for women in Qalamoun area, al-Abda for men in Qalamoun area and al-Shoukrya in Idleb and Aleppo.

Craftsman Nadaf weaved another silky kinds of mantles, womanly shawls, and manly cloaks, as for other kinds of, inscriptions and trappings which added to Hatta ,shawl , and cloaks are several and according to demand sometimes

Hatta is known with another names like al-Paiya Warda  al-Arisha , al-Ghareeb Zahra and etc. where added to it silky threads and several colors and sometimes threads  mixed with  golden or silver water  upon the demand which give them high value .” 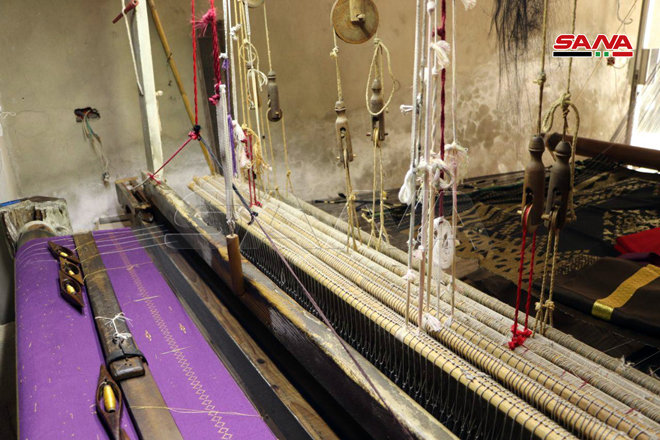 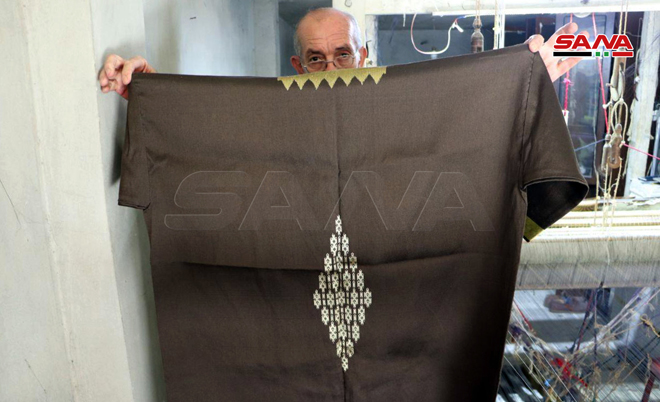