Damascus, SANA- People’s Assembly on Sunday held its 13th regular session of its 2nd legislative term, chaired by Speaker, Hammoudeh Sabbagh, in the presence of the Prime Minister, Imad Khamis, and the Ministers after suspending the session since May 3rd due to preventative measures taken to confront coronavirus pandemic. 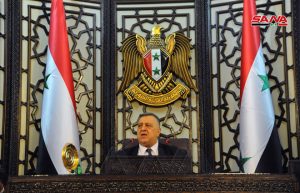 Sabbagh said that Syria encounters an escalation in the economic ,psychological, and media wars, adding that the so-called “Caesar Act” is not only a blockade on Syria , but it also poses threat to everyone dealing with the country , and that constitutes a blatant aggression on the sovereignty of states and a clear violation of international legitimacy norms and human rights , and international humanitarian law.

The Speaker affirmed that the pressures on Syria come as a result of its defeating the forces of evil and aggression, on top the US.

For his part , Khamis said that “since the middle of 2019, the features of the new war led by countries ,which conspire against Syria, has intensified by stealing resources of the country and attempting to impoverish the Syrian people, and this was evident in tightening the unilateral coercive measures imposed on Syria and preventing it from securing the needs of its people. 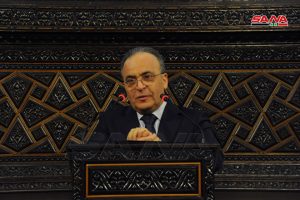 The Prime Minister went on to say that the ugly face of countries which impose unilateral coercive measures became clear with the spread of Coronavirus pandemic, as US and the European Union refused to lift these measures.

He affirmed that Syria has resisted a war which has been waged on it for nine years, and today it will be more determined to overcome the aggressive measures imposed on it through self-sufficiency and food security.

Khamis indicated that the US administration today is taking a new step in its hostile project against Syrian people by imposing new unilateral measures which target the livelihood of the Syrian citizens and the work of the institutions of their country, which has been striving since the beginning of war to provide the needed services and subsidized goods despite all the challenges facing them from damaging their capabilities and lack of resources.

Regarding the exchange rate of the Syrian Pound against foreign currencies, Khamis pointed out that the exchange rate was recently affected by the tightening of foreign sanctions and situations in some Neighboring countries and increasing the country’s consumption of imported raw materials.

As for the strategy of tackling the Corona epidemic, Khamis stressed that in light of the economic and living pressures, the country has gradually returned to normal, except opening borders, with commitment to implementing the preventive measures that curb the spread of the epidemic and keeps the government ready to face any emergency.

He called on citizens to be aware and responsible for preventing the spread of  the epidemic and to not neglect the health reserve side.

Khamis added  that to achieve stability in the exchange rate between the years 2017 and 2020 was requiring 20 billion dollars, and contacts are being made with friendly countries to discuss options to enhance the value of the Syrian pound.