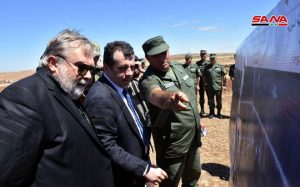 The Consul of Armenia in Aleppo Armen Sargsyan pointed out to the Armenian Humanitarian Mission’s efforts and Armenia’s assistance to the Syria and its people to spread peace.

For his part, Deputy Governor of Aleppo Ahmad al-Yassin underlined the importance of dismantling the landmines remnants of terrorism in Aleppo southern countryside, which had been liberated by the Syrian Arab Army in cooperation with allies and friends.