Moscow, SANA_ The Syrian traveler Adnan Azzam arrived in Moscow at the end of his journey “Syria is the world” which he started from the Umayyad Square in Damascus on April, 20, 2019 on the horseback of his thorough bred Arabian horse.

Reaching the end point in Moscow, Azzam will have traveled more than 6000 km with his horse, Nayazek El-Sham.

Azzam confirmed, in an interview with SANA reporter in Moscow, that the trip comes in appreciation of the stances of friendly countries which back Syria in fighting terrorism and its supporters, and for strengthening the culture of dialogue in the face of extremism.

The traveler explained that the unjust war on Syria is a media war as it is a destructive military war, indicating that his trip aims to explain and clarify what is happening on the Syrian territories, especially to the friends of Syria who stood by it. 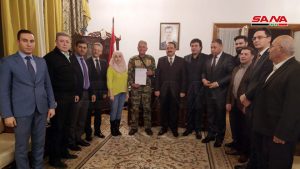 Azzam indicated that, since he entered Russian territory three months ago, he held hundreds of meetings in the cities and towns of the Caucasus in Dagestan, Chechnya, Circassians and Cossacks reaching to the Moscow border.

Syria’s Ambassador in Moscow, Dr. Riyad Haddad, welcomed the traveler Azzam and received him at the embassy headquarters.

The Ambassador said: “Azzam’s solidity and his insistence to convey a Syrian message to the world is not a strange matter for the Syrian people,” adding: “ He managed to overcome all kinds of difficulties that faced his trip as Syria was able to overcome all the conspiracies hatched against it.”

The Ambassador pointed out that “the path chosen by Azzam for his trip does not only express a geographical line drawn on the map, but is a social, historical, and cultural path that expresses the deep-rooted relations between the Syrian and Russian peoples that have been strengthened during the terrorist war imposed on Syria.”

The Russian Foreign Minister, Sergey Lavrov  sent Azzam a message , in which he said, “It is a pleasure to congratulate you on reaching a happy end on your very difficult journey to the territory of the Russian Federation … I believe that you were able to fully implement the noble mission of conveying sincere thanks and gratitude to the Russian citizens for what Russia provided to the Syrian people in its heroic battle against international terrorism for freedom, national unity and the right to self-determination and build a peaceful and dignified life.

Last April 20, 2019, author and traveler Adnan Azzam started a horseback journey from Damascus to Moscow, during which he crossed about 6,000 kilometers, passing through Iraq, Iran, and Azerbaijan.