Al-Moallem: US, Turkey, and Israel continue to conspire against Syria to hinder counter-terrorism efforts Moscow, SANA- Deputy Prime Minister, Foreign and Expatriates Minister Walid al-Moallem said that the United States, Turkey, and the Israeli enemy continue to conspire against Syria to hinder its counter-terrorism efforts, and that Syria is also subjected to methodical plundering of its petroleum by the US. 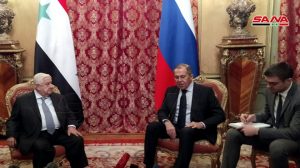 This came at the beginning of his talks with Russian Foreign Minister Sergey Lavrov on Monday prior to the launch of the 12th Syrian-Russian joint committee for commercial, economic, scientific, and technical cooperation.

Al-Moallem said that Syria is facing a continued Turkish aggression in the north of the country, in addition to the methodical plundering of its oil by the US, which has also sent drones to attack petroleum facilities in a city of Homs a few days ago, while the Israeli enemy fired rockets at Damascus and its surroundings last night.

Al-Moallem said that the US, Turkey, and the Israeli enemy, along with a number of states in the region, continue to conspire against Syria to hinder its joint efforts with Russia to fight terrorism, particularly Jabhat al-Nusra. 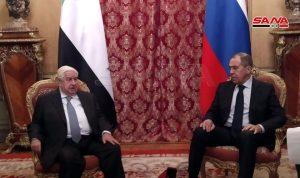 He hoped that the economic relations between Syria and Russia will reach the level of their political and military relations, noting that the Syrian state gives priority to Russian companies in the reconstruction process due to Russia’s support for Syria in fighting terrorism.

For his part, Lavrov said there is dynamic development in bilateral relations based on what the Syrian and Russian presidents agreed upon, and that the meetings of the joint committee produced very promising and positive results.

He said that an integral part of bilateral cooperation is continuing to coordinate and cooperate in the relentless battle against terrorist organizations in Syria until they are eliminated.

Lavrov said that Syria is transitioning into the stage of restoring stability, reconstruction, and launching huge economic projects, which has become a reality after the Syrian Arab Army established control over large areas and liberated them from terrorism with the support of the Russian Aerospace Forces.

He also lauded the launch of the committee for discussing the constitution in Geneva despite all attempts to obstruct its work, affirming the necessity of finding a political solution to the crisis in Syria according to the resolution no. 2254.

Lavrov said that the international community should help in the return of the displaced Syrians to their homeland, and to take into considerations all the developments in Syria when planning to provide humanitarian aid. 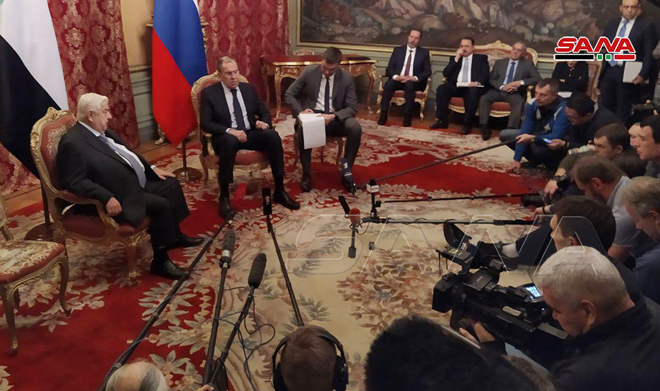