During a solidarity stand held in front of the building of the governorate in al-Baath City on Sunday on the 38th anniversary of the baleful decision issued by the occupation authorities on December 14, 1981 on annexing the occupied Syrian Golan to the Israeli occupation, people of Quneitra described the occupation’s decision as null and illegal, expressing their confidence in the Syrian Arab Army and in the inevitability of victory over the Israeli occupation no matter how long it takes. 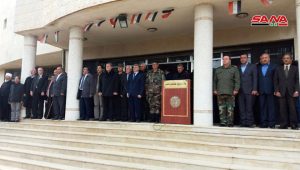 The released captive Suliman al-Maqet, who is also the father of Sedqi affirmed during a phone call the adherence of people of the occupied Syrian Golan to Syrian identity and their belonging to their homeland despite of all the oppressive practices of the occupation authorities against them.

On December 17, 1981 the UN Security Council issued a resolution considering the Israeli decision as null and void.