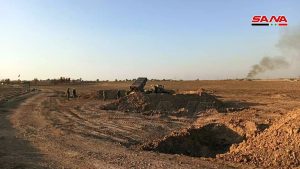 SANA’s reporter said that in framework of their missions of protecting the civilians, army units expanded deployment in Tal Tamer countryside, and fortified a number of their positions in Tal Shamiran village to secure the supply routes opened by the army a few days ago along international highway leading between Hasaka and Aleppo.

The reporter said that the people of the area started to return to their villages and farms gradually after the army units had deployed in them.