Hasaka, SANA- Syrian Arab Army on Thursday completed deployment on the border with Turkey in Hasaka province at 200 km long starting from Ras al-Ayn northeastern countryside in the west towards Ayn Dewar town in al-Malikiyah countryside in the east. 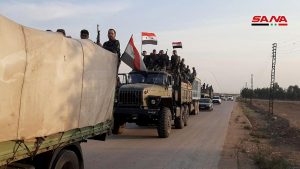 SANA reporter said that the deployment started from al-Jowadiya town to al-Malikiyah in Hasaka countryside towards the northeastern as the units of border guard forces deployed in six points at 200 km long, including the villages of al-Mreijat , al-Boustan, Sweidiyah Gharbiyah, Shamsiyah, Habb al Hawa and Ayn Dewar in the far northeastern.

The reporter added that the Turkish occupation forces and its mercenaries occupied al-Arishah village in Ras al-Ayn countryside after targeting it with artillery strikes and attacking it with medium and heavy machineguns and mortars, whereas the terrorist organizations supported by the Turkish regime continue to attack the locals, and loot properties in the northwest countryside of Hasaka.

army border deployment 2019-11-14
admin
Share
Previous Syrian artist excels in drawing icons locally and internationally
Next President al-Assad: The American presence in Syria will generate military resistance which will exact losses among the Americans, consequently force them to leave