New York, SANA_ Deputy Prime Minister, Foreign and Expatriates Minister Walid Al-Moallem held a series of meetings with a number of his counterparts on Saturday on the sidelines of the 74th session of the United Nations General Assembly.

Al- Moallem met with Indian Foreign Minister Subrahmanyam Jaishankar and discussed with him ways to strengthen the historical relations between the two friendly countries .

Both sides reviewed the ongoing preparations for the next meeting of the Syrian-Indian Joint Committee in Damascus and the resulting agreements and memoranda of understanding that will contribute to the development of economic relations between the two sides .

Minister al-Moallem reviewed the latest developments in Syria and thanked India for its support to Syria during the crisis.

He pointed out that all possibilities are available to develop relations between the two friendly countries.

For his part, the Indian Foreign Minister pointed to the historical and deep-rooted relations between Syria and India.

He affirmed India’s desire to strengthen its economic cooperation with Syria and continue to provide all forms of support and assistance to it.

Minister al-Moallem discussed with Foreign Minister of Belarus Vladimir Makei various aspects of relations between the two friendly countries, where both sides praised the continuous and accelerated development of these relations. 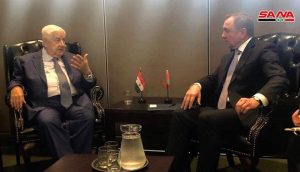 They stressed the importance of building on the results of the meeting of the Syrian-Belarusian Joint Committee held recently in Damascus, as well as the results of Minister al-Moallem’s recent visit to Minsk.

Developments in Syria were also reviewed.

Al-Moallem thanked the Republic of Belarus for its support to Syria over the past years and its support for just Syrian issues in international forums.

For his part, the Belarusian Foreign Minister reiterated his country’s support for Syria in all international forums, congratulating Syria on the formation of the committee of discussing the constitution.

He affirmed the willingness and readiness of Belarus to cooperate with Syria in all fields that would develop relations between the two friendly countries.

Meeting with his Armenian counterpart Zohrab Mnatsakanyan, al-Moallem  stressed Syria’s determination to liberate all its territories from terrorism alongside with working on the political track through the committee of discussing the constitution and on the economic track through the reconstruction process. 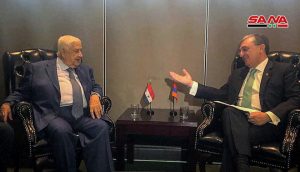 Al-Moallem briefed Armenian counterpart on the latest political and field developments in Syria.

Minister al-Moallem praised the historical relationship binding Syria and Armenia and thanked Armenia for its humanitarian assistance to Syria in the field of demining and through its medical staff.

For his part, Minister Mnatsakanyan pointed out to the long-term historical relationship between the two countries and the distinguished social ties between the two peoples, which would enhance the friendship and cooperation relations.

He underlined his country’s continued support for Syria’s efforts to restore security and stability to the whole Syrian territory.

Al-Moallem’s talks with Iraqi Foreign Minister Mohamad Ali Alhakim touched upon ways to strengthen bilateral relations between the two brotherly and neighboring countries and the importance of permanent coordination between them to face common challenges, especially fighting terrorism and foreign interference in their internal affairs. 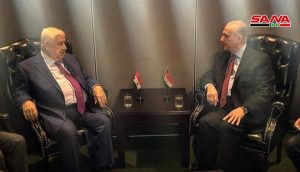 Minister al-Moallem reviewed the latest political and field developments in Syria, reiterating Syria’s determination to fight terrorism and liberate the whole Syrian territory from it and from the foreign occupation and illegal foreign military presence.

He stressed the importance of upgrading relations between the two countries to meet the aspirations of their people and achieve their common interests.

Al-Moallem reiterated the call to overcome all obstacles facing the re-opening of border crossings between the two countries.

For his part, the Iraqi Foreign Minister congratulated the Syrian side on the formation of committee of discussing the constitution.

He stressed Iraq’s categorical rejection of external interference in the work of the Committee,  voicing Iraq’s deep concern and rejection of all projects put forward by some parties that would violate the sovereignty of Syria on all its territory.

The Iraqi minister emphasized the importance of continuous coordination and cooperation between the two countries in various issues, including the issue of the return of displaced Syrians to their homeland, as well as Arab-Arab relations, reiterating Iraq’s support to  Syria in its war on terrorism.

Al-Moallem also met with Sudanese Foreign Minister Asma Mohamed Abdalla and listened to a detailed presentation on the latest political developments in Sudan and the steps being taken to achieve comprehensive peace in all Sudanese territories in the coming stage.

He expressed Syria’s happiness for the gradual recovery of the brotherly Sudan and restoration of its status on the Arab and regional arenas.

Al-Moallem pointed out that the relations between Syria and Sudan are deep-rooted in various fields, emphasizing Syria’s desire to strengthen these relations for the benefit of both countries and peoples.

For her part, the Sudanese Foreign Minister expressed her country’s aspiration to develop relations with Syria in all fields, affirming Sudan’s total rejection of all unilateral measures taken by some parties that would violate Syrian sovereignty.

She underlined the need to fully respect Syria’s sovereignty, independence and territorial integrity.