Hasaka, SANA – With the start of the new school year, students in Hasaka province head to state schools that teach the curricula of the Syrian Education Ministry in Hasaka and Qamishli cities after the US-backed Qasad (SDF) militias imposed their own curricula in the areas where they are active. 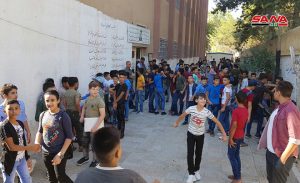 SANA met a number of students while on their way to school, including second-grade student Raad from al-Nashwa al-Gharbiya neighborhood who has to commute for 4 kilometers each day to reach al-Azraa school in Hasaka city after Qasad closed down the school in his neighborhood.

Fourth-grade student Marah who also studies in al-Azraa school talked to SANA’s reporter about her fond memories of Sleiman Alo school in Ghuwairan neighborhood which was also closed down by Qasad, saying that the commute to her new school is exhausting. 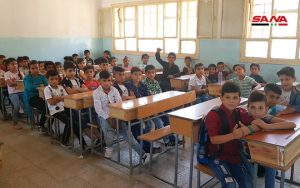 Several locals secured transportation to take their children to distant schools after Qasad closed them down, with one of them, a man named Azzam, taking his three children on a motorbike from their home in al-Zuhoor neighborhood to their schools. He said that Qasad closed schools to pressure parents into accepting the curricula they are pushing, but the parents opted to transfer their kids to schools in the city center.

Another parent, a woman named Khuloud, takes her kids to school using a taxi, saying that the extra costs didn’t deter her from having her kids study the Syrian curriculum. 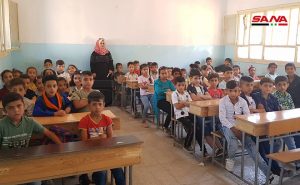 The Hasaka Department of Education took steps to accommodate around 86,179 students in the province, supervised by 6,695 teachers in 320 schools.

To deal with the increasing numbers of students due to Qasad closing down schools in some areas, the Department set up 15 school complexes in Hasaka city and 14 in Qamishli, in addition to installing 60 prefabricated classrooms and repairing 28 schools that had been damaged by terrorist acts, as well as setting up classrooms in various state establishments.