Damascus Countryside, SANA – The authorities found large amounts of weapons in the southern region, including US-made TOW missiles, a surveillance drone, and assorted machineguns and rifles. 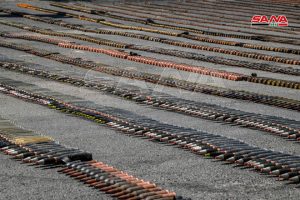 A source told SANA that while combing villages in the southern region, the authorities found a warehouse that had been used to store weapons and ammo by terrorists, and that it contained more than 200,000 machinegun and assault rifle rounds, US-made TOW missiles and their tripods, and a Phantom 4 surveillance drone.