Though coercive economic measures, new projects to back electrical system Damascus, SANA- Electricity sector nowadays is facing big challenges because of the unilateral, coercive measures imposed on the Syrian people which doubled the cost of producing electric energy.

Planning Director at the Electricity Ministry, Mohammad Bassam Darwish, told SANA that the economic sanctions put on the Syrian people included the process of funding the large electrical projects in addition to the banking transfers, insurance on the power facilities, equipment and foreign experts. 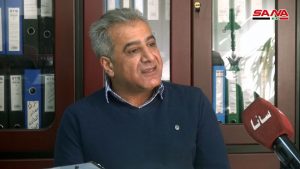 He added that the power sector has also suffered from the restriction in the movements of shipments and delivery of oil productions that feed power generating stations according to those measures.

Darwish went on to say that cooperation with the friendly countries has contributed to alleviating the impact of those unjust measures, adding that one of the most important fruits of cooperation with the friendly states was putting the corner stone for a project to generate power in Lattakia in al-Rastin village, near 16 Tishreen dam, with 526 MW capacity and 213 billion SYP cost, in addition to many new projects and memos of understanding on the way.

During the seven years of crisis, electricity was a target for the terrorists and their repeated aggressions on this vital field.