Damascus, SANA – Deputy Prime Minister, Foreign and Expatriates Minister Walid al-Moallem said that despite the crisis and some countries’ conspiring against it, Syria believes deeply in Arabism.

Meeting professors and students from Damascus University on Sunday, al-Moallem said the visit of President of Sudan Omar al-Bashir to Damascus on Saturday is another step towards breaking the siege imposed on Syria. 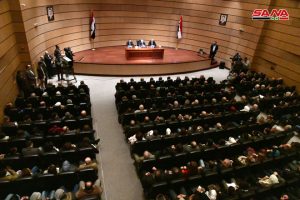 About the situation in the northeastern part of Syria, the Minister said that no-one in Syria accepts any talk of independent or federal entities, and that the state’s decision is to restore sovereignty over every inch of Syria.

He underlined the importance of the convening of the Syrian-Russian Joint Economic Committee in Damascus last week, as such meetings establish basis for economic, cultural and social strategic partnership to match political and military relations with Russia.

Al-Moallem noted that the countries that have warred and conspired against Syria are paying the price of their policies, as they are suffering from high unemployment, inflation, and political and social division.

“All those who conspired against Syria under the leadership of the USA will not be in a comfortable position next year, while our situation in Syria is improving day by day,” he added.

On the situation in Idleb, al-Moallem said that the Syrian leadership’s priority is liberating the province from terrorism, and that there is constant coordination with Russia in that regard, while the Turkish President and terrorists did not abide by the Sochi agreement.

He noted that the Syrian leadership prefers political dialogue if it can rid Idleb of terrorism, and in the end the decision is to liberate all Syrian territories. 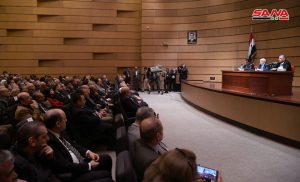 On forming the constitutional committee, the Minister said that it’s too early to talk about it starting its work, and that the delay in forming it is caused by certain Western states’ attempts to interfere in this matter, as well as obstacles put by Turkey.

Al-Moallem said priority for participating in reconstruction will be to the states that supported Syria in fighting terrorism, and that the Ministry’s Economic Bureau is working to expand relations with Iran, Russia, China, India, and Malaysia as part of the policy of heading eastwards.

On the Syrian government’s position regarding the practices of some Kurdish militias and the Turkish aggression on northern Syria, the Minister said that Syrian Kurds are part of the Syrian fabric, and the government is always willing to hold dialogue, at the same time advising everyone to avoid falling for the American delusion.

Regarding the illegal presence of foreign forces on Syrian territory, al-Moallem said that these states are trying to find roles in the political solution for the crisis in Syria which isn’t going to happen, and they should end their occupation of Syrian territory. 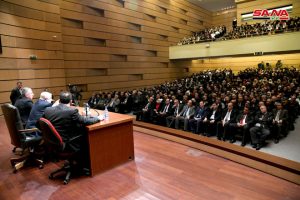 He reiterated that the occupied Syrian Golan is part of Syrian territories and subject to international laws on areas under occupation, stressing the need for respecting the decisions that consider the annexation of the Golan to be null and void.

Al-Moallem affirmed that Syria welcomes the return of all displaced Syrians, as several steps have been taken to facilitate this, with statistics showing that around 220,000 citizens have returned so far, and none of them have been harassed, adding that certain Western forces are trying to prevent the return of Syrians for political reasons.