Damascus, SANA – As its centenary draws near, the famed Damascus National Museum, located in the heart of the Capital, has been partially reopened for visitors, archeologists, and researchers after a seven-year closure, with thousands of artifacts that escaped the ravages of war being put on display. 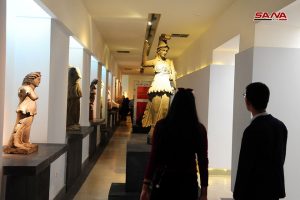 One part of the Museum – containing four wings – has been recently reopened, as the other part is undergoing maintenance so that it would be ready to receive its centennial anniversary in two months, according to the Directorate-General for Antiquities and Museums (DGAM).

Following the partial reopening, Palmyra’s famous ancient statue “Lion of Allat” was put on display in the garden of the National Museum. The 3.5 meter-high monument was fully restored after it was destroyed at the hands of Daesh (ISIS) terrorists in 2015. 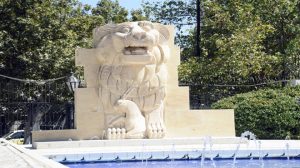 The 2000-year-old stone lion was first discovered in 1977. It was eventually reconstructed by archaeologists Bortosz Markowski and Robert Zukowski in 2005 when it was moved from the archaeological site and placed on a plinth outside the National Museum in Palmyra. In July 2015, the statue was bulldozed and smashed by Daesh terrorists.

More than 9000 new items will join the Museum’s original collection. Some of these pieces have been recovered from sites in Ghouta in Damascus Countryside and Deir Ezzor after these areas were cleansed of terrorism, in addition to artifacts that were recovered by the authorities. 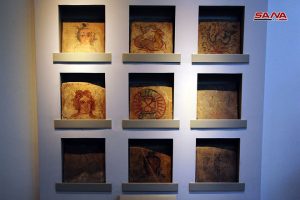 “The additional collection is the fruit of the continued contact with local communities in different regions and authorities, in addition to the international organizations sponsoring heritage. It contains artifacts dating back to the Islamic and classical periods, the ancient Near East, and prehistoric ages,” said Director-General for Antiquities and Museums Mahmoud Hammoud.

An example of prehistoric items is a stone sculpture of depicting the full form of a female figure dubbed “the Mother Goddess” that is similar to the prehistoric carvings with simple, abstract facial features. The style of the piece dates it as belonging to the Neolithic pre-pottery age between 8700 and 9500 BC, and it was recovered from the Qalmoun area in Damascus Countryside province. 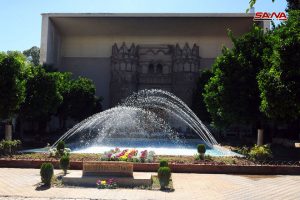 A miniature model of a circular house made from the sun-dried clay, consisting of several rooms around a central, celestial courtyard with several doors and surrounded by a round outer wall is an example of the ancient Near East artifacts. The item serves as a design model for dwellings in the Kingdom of Mary and it dates back in the reign of Sargon of Akkad in the second part of the third millennium BC.

Representing the classical era, a basalt statue for a local ruler with a laurel wreath on his head was recovered from al-Dhomeir area in Damascus Countryside. It dates back to the Roman era (second-third century AD).

Among the most prominent recovered Islamic era items is a copper flask dating back to the Mamluk period between (8th-9th century AD), and covered with geometric and plant-themed decorations and Arabic calligraphy. 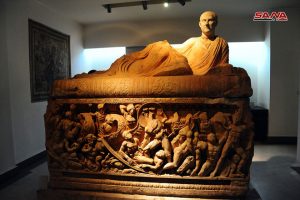 Many priceless historical artifacts have been showcased in the four wings, such as a tablet featuring the world’s first alphabet from Ugarit, and many Roman era mosaics. 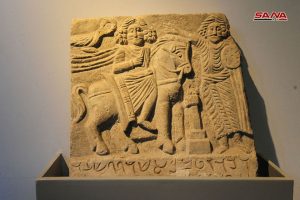 The country’s grand Museum- considered the oldest and most important institution of its kind in the Middle East- is approaching its centenary, having been founded in 1919 with its current building being constructed in 1936 and more wings added in 1956 and 1975. 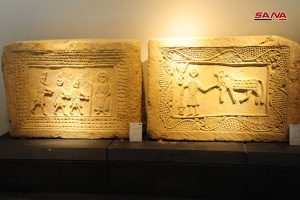 The Museum’s unique findings include restorations of underground cemeteries from Palmyra dating to 108 AD and the façade and frescoes of Qasr Al-Hayr al Gharbi, which dates back to the 8th century and lies 80 km south of Palmyra.

In 2012, the DGAM catalogued and stored some 300,000 items and thousands of manuscripts from around the country at secret locations protected from terrorists’ attacks and shelling, and closed the internal building of the Museum, leaving only the garden open for visitors.

Syria is home to more than 700 archeological sites, many of which have been destroyed, damaged, or looted since the beginning of the war on Syria, a war which had as one of its goals the demolishing of the cultural identity of the county.