Daraa, SANA- Daraa Transport Directorate confirmed that the owners of the Syrian cars stuck in Jordan can enter their cars through the Naseeb border crossing which was opened recently after paying the delay fine.

Speaking to SANA, Head of the Directorate Mouhib al-Rifai said that any car that has not been out of Syria for a full year can enter the Syrian territory normally 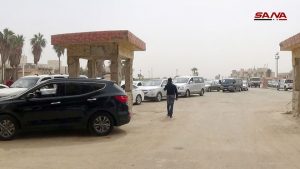 after payment of delay fines only.

He pointed out that the owners of the cars who stuck out of Syria for more than a year have to review the Directorate according to the car license plates to resolve the situation where a fee is paid for the value of the car as listed in the disclosure of its own.

It is noteworthy that thousands of Syrian cars were stuck in Jordan after the closure of the border crossing of Naseeb in 2015 after the terrorists’ domination over it and the owners were unable to return their cars to Syria with the high costs of sea freight.