Damascus, SANA- Al-Assad National Library pavilion within the 30th edition of the Book Fair included 30 rare and old manuscripts, some of which were exhibited for the first time, showcasing examples of what the scientists presented to human civilization. 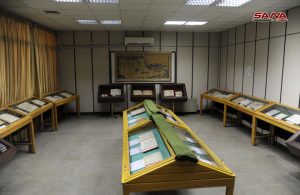 Speaking to SANA, Assistant Head of Manuscripts at the Library Hiba al-Malih said that the pavilion includes ancestral treasures which were handwritten and are very valuable manuscripts, some of them date back to Philosopher al-Farabi.

She added that the pavilion also includes manuscripts of two books entitled ‘Smiles of Hanan’ and a collection of stories entitled “From My Country” of the Damascene author Makbola al-Shalq, one of the first women to graduate from the Faculty of Law at the University of Damascus in 1944. 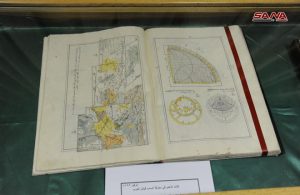 The pavilion show rare manuscripts which are related to the phenomenon of the lunar eclipse, one of which written by the Damascene Scientist Ibn al-Shater and another one for Ibn Sina in addition to manuscript in arithmetic for Arab Scientist Ibn Majid, who guided the Portuguese Vasco de Gama to discover India road.

In the field of medicine, the pavilion showcases “al-Fakher” book by Abi Bakr al-Razi and a manuscript entitled “Tazkaret al-Antaki” for the blind doctor Dawood al-Antaki which dates back to the ninth century AH as well as manuscripts concerning 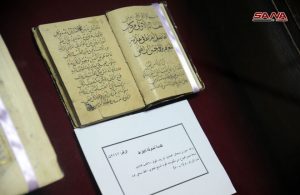 the Christian religion and history and the Roman emperors who embraced them with manuscripts in mechanical engineering and physics.

The pavilion has rare copies of Quran decorated with beautiful floral and geometric motifs.